Nowadays, survival involves knowing how to handle modern inventions, like money and machines, electrons and data and car-washes and stuff like that.

But In prehistoric times, stayin' alive meant something totally different. It probably meant that somebody in your tribe was pretty deadly with a bow and arrow, or a big stick, or some such implement for killing animals so you could eat them. Hunters hunted, gatherers gathered, and life goes on.

Survival for cave men wasn't as easy as it is now.

We know a little bit about this from seeing cave-man paintings that archeologists have discovered and brought forth into the great legacy of human experience and expression. If you've ever seen-- in an encyclopedia, or a masters thesis or a coffee-table book-- a picture of a cave-man painting, maybe you noticed it probably involves killing an animal, like a mastodon, or a saber-tooth tiger or maybe, a possum.

Some things never change. Men still have, with their impressive array of implements, the power of life and death over most critters; this lowly slow marsupial is no exception to the rule of ultimate human mastery.

I thought about this when I encountered a possum this morning. He was suddenly displayed for me to see easily and up close, like a museum painting, or sculpture. But this was in no gallery. It was on a sidewalk where I just happened to be wandering, this summery Saturday morning along a shady avenue in Gainesville, Georgia.

He was not alive. 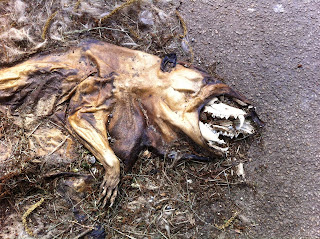 At first, I couldn't tell if it was a possum. It just seemed like a classic critter image, like . . .

like a cave painting. The sight of it connected in my brain with some Neanderthal artwork that I had seen somewhere.

Maybe it was the teeth that ripped this cave-art association right out of my neuronic imagery file. Those bared fangs just leaped into my primeval intuition, like a prehistoric reflex suddenly recovered.

And then, my mental odyssey back to the here and now was punctuated with a momentary stop in the 1950's, when I remembered vividly a bared-teeth image from Old Yeller, a movie about a very lovable dog that went mad with rabies and had to be taken down by his master's father. I remember so clearly seeing Old Yeller's teeth, bared so ferociously, so unexpectedly, by the onslaught of rabies.

Had this been a rabid possum? He looked like one.

Probably not. But he sure looked crazy with those teeth displayed like fangs.

Why hadn't someone, a city sanitation worker or someone like that, scooped this critter up after his untimely demise?

Maybe they left him for cave-art.

But that would be unlikely. Gainesville is a very civilized, lovely, genteel southern city, with magnolias and shady boulevards and classic old houses, and monuments to old soldiers.

Nevertheless, I encountered the possum in an unlikely place-- where a private front yard sidewalk joined the city sidewalk. The fanged critter was directly in front of this grand ole home, which is now an attorney's office. 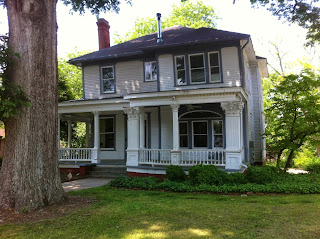 So, obviously, this possum's once-smelly inclusion at the edge of such a serene domicile is not some Neanderthal statement. Probably just the City's oversight. I mean, who wants to mess with a dead old possum in the summertime? This sidewalk relic has apparently survived its stinky phase, to become an artful representation of classic southern culture.

Or maybe its a warning to the other critters: Watch out Pogo; the humans are takin' over!

We have met the enemy and he is us.

Well shut my mouth, it's probably a southern thing, this odd juxtaposition of images, the dead possum and the old someplace. You'd have to be there.

Southerners never cease to amaze me, even though I am one of them.

Now here's a joke to end with: Why did the possum cross the road?

To meet his Maker.

Smoke
Posted by careyrowland at 2:54 PM No comments:

Who knows how many lifetimes ago the Appalachian mountains laid this little stream down between these two ridges.

This afternoon in bright spring sunshine, flowing waters roll softly over mica-laden silt. Here and there the ripples leap over smooth stones, gushing as they go.

It's just a small stream here, but clear, cold water has trickled along this valley's lowest path for centuries.

The creek is not a wild one now; it's been domesticated. Lawn grass, now vibrant with spring greening, extends through the surrounding slopes down to the water's edge. But the peaceful waters still render it, for visitors and passersby, a welcome respite from nearby human habitations. Overhead, the maples, locust trees and shrubs are sprouting leaves. Spring is here at last.

A cluster of two-story apartment buildings adjoin the stream. A street winds pragmatically through the well-planned site. Beside the shady street, which is reasonably quiet most of the time, a wooden landscaped ledge displays low juniper foliage.

I am walking through dappled sunshine below the ledge, which is about four feet high. There between two junipers next to the timbered ledge I see an apple on the ground. It's very red atop the brown bark mulch. Somebody has dropped this apple.

So I pick it up. I am the maintenance man here. Whose is it? Its a store-bought apple. Maybe I'll return it to its owner, or maybe I'll just take a bite of it. But no! There's a big rotten spot on it.

On second thought, because the bad spot occupies about half the apple, I will not eat it, I'm not hungry in mid-afternoon, and surely nobody else wants this apple either. That's probably why its here on the ground by the road.

What shall I do with it?

I will throw this apple. What the heck. This is the first real spring day here in the Blue Ridge. I'll just go crazy like a March hare and throw it and let it smash. Spring practice.

Where shall I throw it?

There's the stream over there, gurgling through the shade and the spotty sunshine about thirty yards away. Maybe some baby trouts would enjoy this apple if it smashes in their watery domain.

I look at the stream. In an instant, my eyes settle on a specific spot in the stream, where water is gurgling over rounded stones. I raise my arm and cock it back like the center-fielder that I was many and many year ago in little league back in the day, and I hurl the apple over at the stream.

It strikes the water with a splash, exactly where I was looking on the water's surface. How did I do that?

I haven't thrown anything in a coon's age. I have not been practicing this. I'm 62. I wasn't even aiming. I was just. . . throwing an unplanned apple on a day in May.

Doesn't everybody throw an apple, or something, in the spring time just to, just for the sake of . . .

It wasn't my mind that did this. It was a sudden, impetuous act, with no purpose. I didn't even think about it. My arm and my brain managed, intuitively, to retrieve some ancient muscular memory from baseball or from skipping stones or . . . it landed exactly where my eyes were focused.

To what do I attribute such intuitive finesse? Is it evolution that preserved within me this unprecedented, unplanned mastery? Hurling a found object across a trajectory in such an arc of indeterminate accuracy that it splashed exactly where my eyes had imagined it would?

Am a genius? Maybe an idiot savant?

Well, no. And I don't think such a wondrous accomplishment as this is attributable to mere evolution.

My belief is: I know there is a God; God did it. Surely I myself could not have pulled off such a thing. God conceived and formed my DNA and my bones and my muscles that cling to those bones, and my neurons that connect up to my brain that commands my arm and coordinates its movements with my eyes, and my depth perception and a hastily-improvised assessment of the appropriate arc of the purposeless apple projectile and the weight of the apple with air resistance and sunshine and springtime and suddenly for no reason whatsoever there it is splashing in the millennial stream.

Surely God hath done this thing with the apple!

But why did I do such a crazy deed as hurling an apple at a creek when I was supposed to be doing my maintenance man job?

A few hours later, I'm thinking maybe my exuberant toss happened because I was jubilant, having just heard Gershwin's Rhapsody in Blue on the radio, or having just realized that it was was a springtime day such as this 350 years ago when Isaac Newton noticed that an apple dropped from a tree and the rest is history and history is being made as we speak.

Glass Chimera
Posted by careyrowland at 8:17 PM No comments:

Sing, not fling, nor sling

Fling it high, sling it low.

Sling it muddly just for show.

Mud, mud, sling up some mud.

Fling it with a thud.

Fling it left, sling it right,

sling it 'til you fight.

It aint right; it's a muddy blight.

but where to go? Mexico?

Tow that barge; tote that bale.

Drag it 'til we fail.

Yell and scream and shout

'til the buzzards come winging out.

Rant 'til buzzwords turn their trend,

their fuzzy butts toward our bitter end.

Fill us, Lord, while we sing.

We need not fling, need not sling.

'til your kingdom you do bring.

Selah.
Posted by careyrowland at 3:39 PM No comments: