From the smallest  of the small

through quarks at the bottom of it all

to the farthest galactic star,

we wander in a maze;

we wonder at its ways:

Surely all this stuff did arise from the Creator!

Or maybe it evolved through Nature?

yet astounded by so much intricate simplicity—

as if there are two original outgrowths to discover.

Now perched on a precipice of nihilistic trauma,

Two multi-branched entities with o'erhanging claims to maintain us:

it arises from, like, stuff we learn in college;

the other, an affirmation, provides purpose for our strife:

we simply harvest belief from an ancient tree of life..

These two trees we see

The smart ones manage to survive 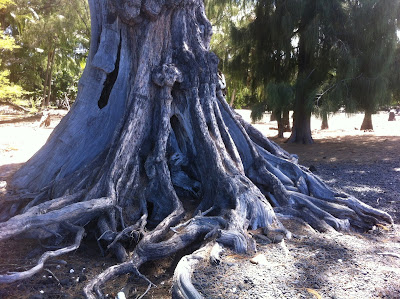 while the faithful eternally revive . . . 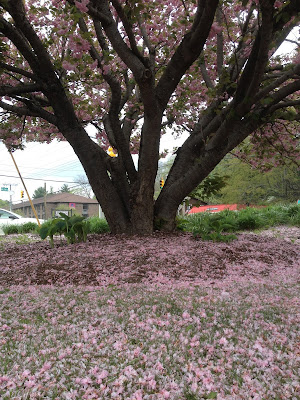 '. . . and the leaves of the tree were for the healing of the nations.”

Posted by careyrowland at 6:24 PM No comments:


Herein I recommend a novelized real story from that infamous "War in Vietnam."

John Podlaski’s novel about a brand-new American soldier in Vietnam strikes at the heart of the matter— just what the hell were our soldiers over there supposed to be doing?

Them brave boys were  putting their asses on the line, stalking communist enemies in strange jungles on the other side of the world, when all the while their survival instinct was demanding them to just hunker down, lay low, and get through their year-long sentence of jungle warfare in one living, still-breathing piece.

And All for what?

Because we sent them to do a job—kill communists, and run the ones we couldn’t kill back to the North.

Now we all know it didn’t work out that way, but we learned some lessons—and the world did too—in the process.

The problem our guys had over there was: how could we know, in a SE Asian village scenario, which villagers were helping the NVA, and which ones were on our side? As if these rice-cultivating peasants knew the difference between Karl Marx and George Washington!

After reading this book, Cherries, it seems to me that, in the midst of the terrible gun battles, every soldier’s internal war must have been a constant conflict between these two missions: to kill enemies and thus keep the brass-mandated “body count” on an upward curve, or to stay alive!

Which would you choose?!

In most cases, it seems it came down to protecting yourself and your squad buddies, while treading fearfully through the booby-trapped minefield of two opposing international ideologies whose political strategies had turned absolutely, militarily lethal.

That project required real men—brave soldiers who could bite the bullet— who could launch out and give it a shot while death and danger stalked them at every turn along the path.

This was a terrible, terrible ordeal that our nation put these guys through! We need to talk about it.We need to acknowledge their incredible bravery.  We need to ask: Just what the hell happened back then and there in Vietnam?—in that war that so many of us managed to evade.  Whether you were for the war of against it— reading John Podlaski’s “Cherries” is a provocative way to begin the assessment— an evaluation that needs to take place, for the sake of our nation’s future security.

Read the book, because this quasi-autobiographical story gives a close-up, day-to-day, boots-on-the-ground account of what our guys were doing over there in Vietnam, while we were trying to figure it all out here, stateside— here, safe in the home of the free, while the brave were answering the terrible call that our government had imposed on them.  They endured that jungular hell-pit so that we, as a nation, could, in spite of defeat,  pass successfully through the 20th-century burden of Cold War paranoia.

John’s fictionalized personal story fleshes out the constant conflict between two soldierly inclinations: fulfilling military responsibility by driving up enemy “body counts,” vs. following  the human instinct to just stay alive, and somehow make it through your one-year tour of duty without getting your ass killed.


Our American purpose there was unclear. No definite battlefield could be found;  the war was waged wherever our boys happened to run into the Viet Cong or the North Vietnam Army, in a perpetual theater-game of deadly hide-and-seek. Our teens and twenties recruits and draftees were dropped into unfamiliar Asian jungles, then immersed immediately in extreme fear—fear like you would feel seeing two of your platoon-mates’ heads staked on bamboo poles.

Not in Kansas any more, Toto!

Khe Sahn. A Shau, Ah shit! What have we gotten ourselves into?!

Read John’s book to find out what perils our boys  were trudging through while we stateside were trying to figure out the whys and the wherefores.

BTW, by the 1990’s it was plain to see that  the free world, led by the USA, had prevailed in our struggle against both fascism and communism. In the big picture, our effort in Vietnam played an instructive role in that victory. The governance of nations has more to do with learning from your mistakes than fighting a lost cause to some idealized bitter end. 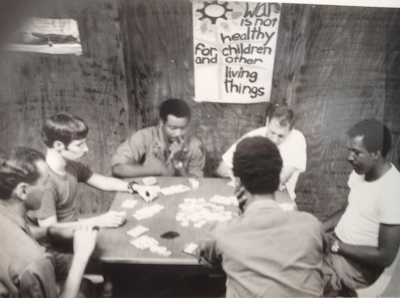 Thanks to you all you guys—Cherries, LongTimers and Lifers—who answered the call to service at that time. Oh yeah, and here’s another belated message: Welcome Home!

King of Soul
Posted by careyrowland at 6:16 AM No comments:


The coming of the New World dawns slowly; soon and soon very soon its urgency is, was, and will be proclaimed with bold horns and wind. 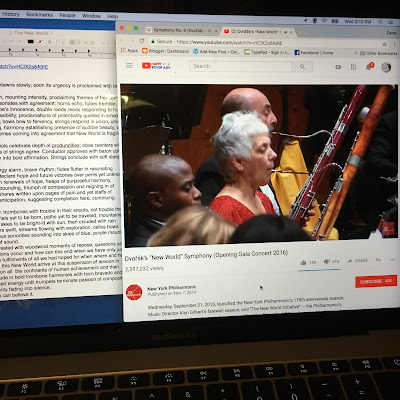 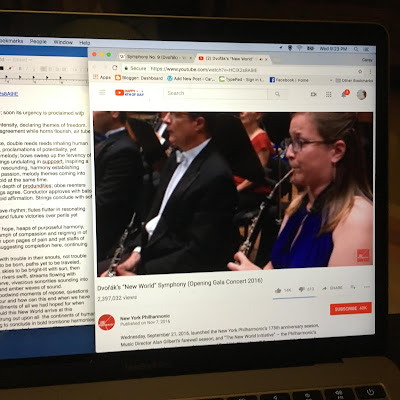 Bows sweep up the fervency of this New World and now the golden door swings open, accompanied by bold trombones, to awaken huddled masses yearning to be free!

Strings, undulating in support, inspire a melting pot of symphonic unity, the Union resounding. Harmony ripening establishes a beachhead of audible beauty with well-tempered passion. Strains of melody  wave like amber waves of grain. Themes of freedom abound in the harvesting of human liberty, melding with the promise of a New World; it arrives so fragile, and yet so  bold. 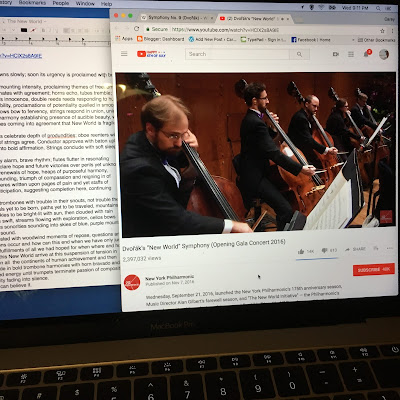 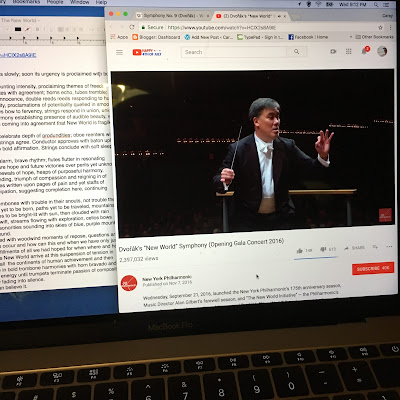 then urges them on with baton uplift, so horns part the ready sea of sound with their bold fanfare. Strings conclude with soft sleepy assent.

Rounded melodies bring forth renewals of resolve, heaps of purposeful harmony, mountains of good will, joy abounding, with triumph of compassion and reigning in of passion, to squeeze compelling music out of skeletal staffed spheres written upon pages of Dvorak's painstaking work.

Haste and urgency suddenly are the order of the day. Trombones resound with trouble in their snouts— not trouble they have made, 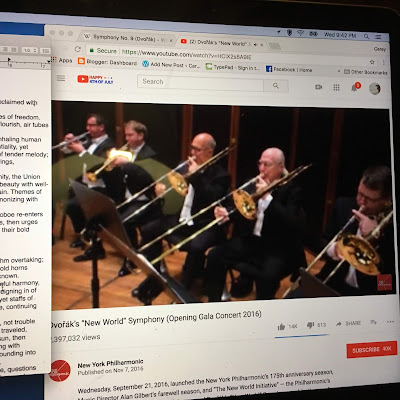 --but prescient tremors of trials yet to be born, paths yet to be traveled, mountains to be climbed, trails to be trod, skies to be bright-lit with sun, then clouded with rain bringing nourishment to rivers swift, streams flowing with exploration, as cello bows stride with expansion, across the wide prairie, through the dark forest, vivacious sonorities ascending into skies of blue, purple mountains majesty and amber waves of sound.

Crescendo coming, but abruptly arrested with woodwind moments of repose. Questions arise of when and where conclusions can occur with so much going on. And how can this orchestra it end? when we have only just begun—we have not yet spun upward in fulfillment of all we had hoped for.

When where and how could this would this, should this New World arrive at such suspension of tension in frantic strains strung out upon  the peaks of human achievement and then laden into craters of creation at tranquility base? and now suddenly resolving to conclude in bold trombone harmonies with brassy bravado faithfully at their side and bountiful background violins striding o'er the airwaves in intense kinesis. Oh say do those star-sparkling trumpets yet arise! to conclude our tumultuous philharmonia with triumphant trumpet harmonia. . . but now fading into silence.

There you have it, y’all. The New World as Antonin Dvorak conceived it in 1893, and New York Philharmonic performed it in 2016.

King of Soul
Posted by careyrowland at 8:40 PM No comments: