Their Last Full Measure of Devotion

In the novel King of Soul, which I have recently published, college students Donnie and Kevin take an impulsive road trip to Kevin's home in Ohio. This happens in early May of 1970. While on the road in Tennessee, they pick up Ed, a hitchhiker. Ed has been honorably discharged from military service in Vietnam only three weeks ago. In chapter 23, we find Donnie and Kevin accompanying Ed to a bar in Nashville:

At the China Beach bar and grill in downtown Nashville, Donnie and Kevin tagged along while Ed linked up with a buddy of his from the war.

Sled was a sort of hillbilly with a twist. His West Virginia upbringing had been traumatized in a snow-sledding accident that happened when he was ten years old. In a head-on collision with a pine tree, a low branch had penetrated his left cheek. A scar that resulted from the surgery gave the appearance of a question mark on the left side of his face. From his teen years onward, all John’s people called him “Sled” because of what had happened to him in a sledding accident when he was a kid.

Ed and Sled had become friends at Fort Hood, Texas, before they both went to Vietnam. They were assigned to the same Company, but different platoons. On this particular evening , Sled and Ed were having beer and burgers as they celebrated the fact that they both had survived Vietnam. This was the first time they had seen each other since both were honorably discharged. Donnie and Kevin listened intently as Sled reported to Ed the account of how their CO, Lt. Gary, had fallen in battle only 11 months ago.

Sled explained that, in a strategy to avoid group casualties, Lt. Gary had his men spread out as they were advancing down a jungle hillside. Three dozen soldiers had distanced themselves from each other, and each man was walking alone. The radio man reported that an NVA encampment was below them, but the exact location had not yet been determined.

Delta company was thus strung out for a mile or more. When their point guys reached the bottom, they caught sight of evidence of the enemy bunkers above them, up on the north side. Sergeant Charles halted his men at a covered spot. He knew they were near the enemy because, he said, he could smell their rice cooking; but as he took a few steps to obtain a better view of the area in question, suddenly he was struck with a bullet. It hit him in the abdomen;. Within seconds, an assault by automatic weapons erupted somewhere northward and above them, with what sounded like AK-47 fire.

Sgt. Charles did not make it home alive from Vietnam.

On this Memorial Day, 2017, we remember Charles and the other 54,000 American soldiers who never got back here to taste the good life of the dear ole US of A. We appreciate that these men and women sacrificed their last full measure of devotion so that we we can live free. 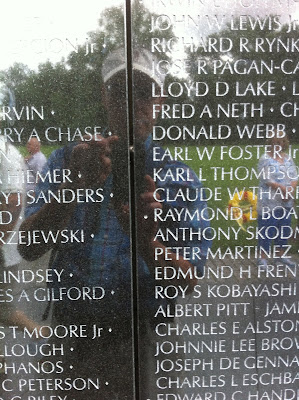 King of Soul
Posted by careyrowland at 4:03 PM No comments:

It did seem Nixonistic to me

Then suddenly there was all this talk going around about Trump firing Comey.

Some TV talking head said it seemed like something Nixon would do. Then an op-ed prognosticator wrote that it was a Nixony thing to do. Some columnist somewhere opined that it was positively Nixonic. And the fact that Trump was acting so belligerently was positively Nixonesque. But really, it did seem Nixonish to me. However, when you get right down to it and push comes to shove, it was simply a matter of Trump nixing the Comey problem so that it would go away. But it doesn't seem like Comey would just "go away," as if such a hubbub could be put away like a used dishrag or even a renegade clandestine email server.

But to his credit, it did seem uncharacteristically nice of Trump to be be acting on Hillary's behalf, defending her against Comey's nosey investigations by showing Comey the door. I mean it's pretty well known that Comey knew that Trump and his guys didn't have anything to do with them Russian hackers and their nefarious emailing-stealing tactics and all their back room deals and fifth-avenue high-fallutin' conflummucks. Really it was just poor Hillary who was being e-ttacked needlessly.

And it turns out that Trump is the hero, kind of saving Hillary at the last minute from being run over, as it were, by a runaway train of emails, so to speak, after the beltway rumor mill had villainously tied her to the railing track of public accusations with unsubstantiated allegations flying around like flotsam in a flyover country fiasco before Trump saved her from such public humiliation.

Looking back on it, it did seem like something Nixon would do, and so you could say that the whole brouhaha has been nixed, or nipped in the bud, due to some behind the scenes watergatery Nixonistic Agonistes tragi-comedy manipulations and malnutritions.

The real question is eerily similar to that revisited breaking story about what VP Agnew knew back in the day--when did he know it and how did he know it and why he-she-it didn't do anything about it. Looking back on it, I don't think it's something Nixon would have done, and it just seems the whole situation is ridiculous.

Now that I think about it, I don't think even Nixon would have done such a thing, but Trump might, and in fact did. I mean, after all, he likes to throw his weight around. What else is new?

In other news, there's a traffic jam on the beltway, and another one on 5th Avenue, but who knew? And when did they know it, huh? You tell me. It just does seem positively Nixonesque , and rather tricky if you ask me.

But of course no one's asking me. You?

Glass Chimera
Posted by careyrowland at 1:53 AM No comments: