When Alt-Right and Alt-Left clash in furious altercation it’s time for all parties concerned to alter their attitudes.

And I’m tired of all these Alt-whackos vying for attention; aren’t you?

Although I may be operating in an alternative universe to even suggest that all these rampant extremists could ever allow themselves to agree on anything, I nevertheless assert that anything can happen and occasionally does.

I mean, we almost split up about a hundred and fifty year ago, but the advocates of American unity prevailed and we managed to overcome the great divide that almost split us asunder.

So really, to split up now after all we’ve been through would be asinine.

Also, it would be un-American.

So I’m hoping we can assemble any alliance we can assimilate to alleviate this awful divisiveness. I mean, even Alt-Center would be better than what we got now. And a little altruism wouldn’t be a bad idea either.

Can we find some agreement here? I mean, my daddy used to say it’s hard to remember when you’re ass-deep in alligators our objective was to drain the swamp. The Alt-Right politicians said they wanted to drain the swamp. And I know that idea has a  lot of allure for folks who want to stir up the pot, but you gotta remember in a free country some folks would rather smoke the pot than stir it up.

We all just gotta get along here. You hear what I’m sayin’? We gotta find the allowable limits of all this alternating Alt-ism, Alt-this and Alt-that and then we gotta adjust our attitudes so as to  lower the  altitudes of aggression before it’s all over.

I mean, in ancient time when things got this bad God allowed an alluvial disaster to alleviate all the alleged bad stuff that was going down at that time. So lets’s not forget that a rising tide lifts all boats. Yeah, and I say unto thee: all aboard that’s goin’ aboard. And if you believe that I’ve got some alluvial deposits in Arizona I’ll sell ya.

Are you trackin’ with me here? The climes they are a-changin’! I’m a-tellin’ ya, And things are gonna heat up real quick if’n we don’t align ourselves with the planetary potentiary powers of of political Alt-centrism. And not only that, let's allocate some good ole fashion common sense, y’all; send it to the Appropriations committee.

Think about it this way.  If’n you get the alt-extremist notion to call somebody an alt-asshole just check it at the door because them’s fightin’ words, and also because everybody has one so why call it to everybody’s attention!. Instead, you could allay the fears of all parties and both so-called Parties  by just, instead of inciting to riot, advancing toward  some kind of advantageous alliance instead of  a big all-out alt-ercation that degenerates into some freak goin’ bonkers and drivin’ a car into a crowd of Alt-leftists, even if they are Antifa.

I mean I’m from Ford country. On a quiet night you can hear the Chevys a-rustin’. Nevetheless, I love all you Chevy-idiots out there? Come on, now! Group hug. Stop and smell the Anti-roses.

I mean, these days seems like everybody and their brother is anti- something, but I am posing the question here and now—just what are for? What the hell are you for? Are you FOR anything? Motherhood and apple pie?

On the other hand, now that I think about it, I ascertain that even Motherhood is on the choppin’ block now, with all this trans-this and trans-that, trans-he and trans-her, trans-he-she-it.

And if you wonder what I’m alluding to, think again. I appeal to our better angels. But if you can’t attest to all that, just  fuhgeddabowdit. We’re done here. Maybe it’s just me.

I prob’ly need to see my analyst.

I’m just upset because I’m over-reacting because I’m allergic to Altism of any kind, left or right, liberal or conservative,  fascist or communist; and I think if the Chileans could get past the Allende v. Pinochet debacle then we can overcome this whatever-we-got now ascent toward Alt-assininity.

What we the need around here is some dam prayer. But if you can’t allow that, if it’s against your constitutional sensitivities and asininities, just let the cards fall as they may; we’ll play politics awhile till the altercation blows over.

We’ll let the cards fall as they may, if that’s the way it must be. Let the prize go to the highest bidder.

And your bid is what?

Four no-trump, you say?  For no-trump?

Well ok then. We’ll see how this plays out.

But wait! What light through yonder window breaks?, methinks I hear the strains of a faraway refrain:

“Through the Altists’ red glare,

with taunts bursting in air--,

it gave proof through the night

that our freedom was still there!

Oh say! that star-spangled banner does yet wave

O’er the land of the free and the home of the brave!” 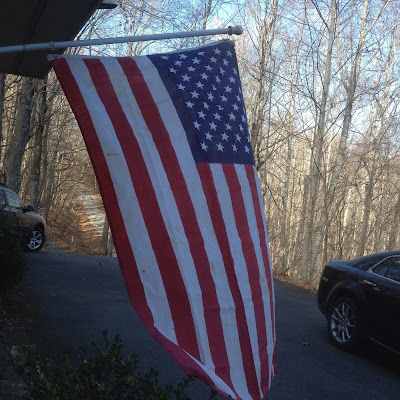 Posted by careyrowland at 2:56 PM No comments:

The hollowness of God


So many people dis God these days--criticizing him because he (she, or it) doesn't correct the dysfunction and atrocity of this world. And the word on the street or in the web is that the Deity, if he (she, or it) does exist, doesn't seem to care enough about us and our faith to make our proper expression of that religion a little easier to validate.
My guess is that God is a little skittish. When he did show up here to give us some direction, we nailed him to a cross. So perhaps you can understand why he doesn't just throw his weight around; he knows we're likely to just crucify him again. In fact, some of his people are probably being given the third degree in places right now here on this earth.
One thing that God has done lately that I know of, however, is: he has taken a lower profile. The deity's presentation to us these days doesn't appear to be aimed at compelling us to revere the high and mighty aspect of his being.
This is a different scenario than what it used to be among us homo sapiens.
There is evidence in the earth, however, that in ages past, God's presence was experienced and conceived of amongst his people in way very different than what his minimal interface with us today would indicate.
In times of long ago, it seems that God was Big.
Which is to say, when humans strove to express their devotion to the Almighty, they did it in a big way. They built big structures for a big God.

We were in Europe a few weeks ago, traveling between three fascinating capitals, Vienna, Prague, and Budapest. Traipsing through such ancient cities was a real eye-opener for me. These old megalopoli are amazing in the eyes of a clueless American such as I, who was born and raised, you see, in a the "new world." I have discovered now that America truly is a new world, compared to this very old place.
In the new world we do have Big, but our Big is mostly applied to commercial stuff, like the Empire State building, Sears Tower, TransAmerica building, World Trade Cent--er, not that one. Anyway, we Americans developed Big Business, so we have built big buildings to express our big ideas about capitalism, and our big development projects and our big bank accounts.
In Europe, hundreds of years ago, Big was all about God. Let me show you what I mean. Here's a shot of the inside of the Cathedral that the Czechs built in Prague, at a complex called Prague Castle: 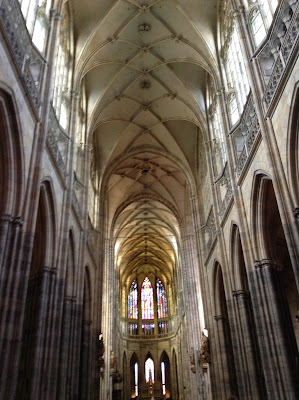 Pretty huge, huh?
You betcha. The Catholics worked on this thing for over 600 years before they got it finished. As you can surmise from the photo, the inside view of this structure is quite impressive, possibly incredible enough to even inspire the beholder's belief in God, or at least provoke a thought or two within the viewer's brain that God's non-existence is an unlikely proposition, since humans would go to so much time and expense to build such a place of worship for Him.
The outside is pretty impressive, too: 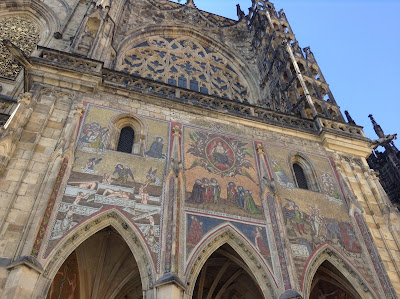 In the 21st-century, however, most folks, mostly tourists such as myself, walk around such places and snap pics on their phones, and maybe ooh and ahh a little bit at the remarkable immensity of human propensity to fill the God-shaped hole in our collective souls by going to all the time and trouble and blood and sweat and tears to erect such an edifice.
Surely they. . . we. . . would not do all that for a God who doesn't exist.
In the olden times, when believers would gather together in this place and others like it, they would attend masses that were performed by priests, and they would pray to God and pray at God and receive communion and then be dismissed by the priest to go back to their humble domiciles and live their simple lives. That's what doing church was all about back in the middle ages when the construction of this Catholic temple was begun.
Nowadays, though, doing church is typically more like what these folks were doing in Vienna, on a typical summer Monday morning, 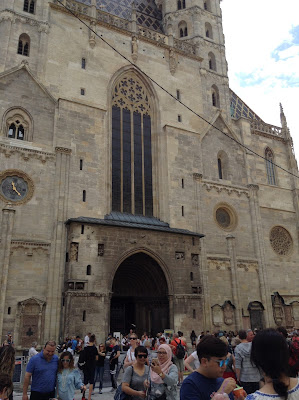 lingering outside the incredibly impressive superstructure of the cathedral, buying trinkets, snapping pics, sipping coffee, then going inside and oohing and aahing at the hugely structured religion, or excuse me, the the huge religious structure, and whispering to their companions, admonishing them to be quiet so as not to disturb those Catholic worshippers who are up there in the front as we speak doing their religious thing. . .
Apparently that's "doing church" in the 21st century.
But for the worshippers in that sancturarial up-front, whatever transpires mysteriously in that hollowness between the congregants and their risen Saviour is not the same as whatever we tourists are doing in the periphery as we gaze up at the distant ceiling.
I do wonder what's going on up there. It's a long way up. Incredible what men and God can do when they put their souls to it.

King of Soul
Posted by careyrowland at 11:20 AM No comments: