What works in China 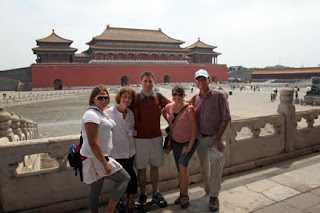 Reading about China in The Economist this morning got me started on a memory.

About a year ago we traveled to Beijing. There we visited the Forbidden City, which had been, for many centuries, the epicenter of power wielded by 24 Chinese emperors.
I and my family had entered the Tiananmen gate and walked with our guide through the entire length of the compound, about 3/4 of a mile, to the Schwumen gate on the north end. Although commoners had been forbidden to enter the place until 1925, plenty of them were there when we ambled through on that sunny July day of 2009.
Toward the end of our northward trek, our guide explained that we were viewing the residence of the former royal families.
I entered a room where an older man was using a small paintbrush to apply calligraphy to a silk banner. Our guide introduced him as a nephew of Aisin-Gioro Pu Yi, the last emperor of China. I asked the calligrapher a few questions about Pu Yi, and he told me I could learn more about the former emperor by reading his autobiography, which could be purchased from a vendor nearby.
And so I did. For 75 yuan, I purchased and read the life story of the child-king who had been ejected from the Forbidden City by the National Army of Feng Yu-hsiang on November 5, 1924. Pu Yi was 18 years old when that had happened.

His story, From Emperor to Citizen, is an amazing first-person account of world-changing Chinese revolutionary events and personal metamorphosis.
He describes how, in sixty years, he had outgrown being a silver-spoon royal baby to becoming an angry prisoner, and ultimately an old man. Through the crucible of time he had made peace with his life, his nation, and his new role in world vastly different from the one in which he had started. On the final page of his story Pu Yi wrote:
"...when I was in total despair about myself and felt that I could not bear to live a moment longer--at those times these Communist Party members had held firmly to their belief that I could be remoulded and led patiently to becoming a new man."
And that he did. His life story is a saga of tribulation and transformation by which he became, in the end, a "new man." He wrote the above words in the early 1960s, shortly before his death.
Pu Yi's enforced re-education, subsequent reconciliation with the Maoist rulers, and his testimony of self-actualization, represent quite a different experience from that of many other Chinese.

The lady Nien Cheng, for instance, In her 1986 book, Life and Death in Shanghai, recalls a conversation with a party worker who had previously known Nien's dead daughter. The young woman had said:

"The new Party officials (who had been) promoted during the Cultural Revolution (1966) were never idealists in the first place. They saw the Cultural Revolution simply as an opportunity for personal advancement, and joined the Revolutionaries to realize their ambition."
Like anywhere else on earth, the changes that were going down weren't all about ideology and societal improvement. Life is much more complicated than that.

Ms. Cheng also shares her talk with a Mr. Hu, who had been a friend of her deceased husband. Describing one incident during the "Cultural Revolution" of the 1960s,Mr Hu said:

"I was thrown out of my house by the Red Guards just like all of us. And I have had my share of misfortune. But we mustn't dwell on the past. We must look ahead and be thankful we have survived."

Although Mr. Hu's trouble was an injustice not easily forgiven, his emphasis on the future instead of the past is a valuable lesson for all of us world citizens-- Chinese, American, or whoever.

Nevertheless, we understand that reconciliation with past abuses does not constitute endorsement of those events. We all know that.
We also see, in retrospect, that the whole of China has itself survived those treacherous political abuses, and maybe even purged itself of some of the oppressive measures that defined that chaotic era. Many changes have come and gone.

After Mao's death, and after the judgments upon the vestige of his wife and her gang, Deng Xiaoping managed to emerge as China's primary leader. His leadership de-emphasized the communist ideology that had driven the revolution and its oppressive aftermath. The reforms of the '70s and '80s sought to replace the old communist model with a hybrid plan that could tolerate capitalist practices. It appears that the burden of Chinese leaders turned, pragmatically, from fomenting revolution to getting everyone fed, housed, and employed. Part of the new program was that folk could even put aside some yuan along the way.
From this American's perspective (and I only spent two weeks there) that emphasis on provision and security is still, for the most part, motivating the Chinese government and the CCP.
Make sure all citizens are fed, housed and busy. Sounds like what our nation and its government are attempting to do today in the USA, though we have also cultivated a noble heritage of preserving life, liberty and the pursuit of happiness for all, or at least trying to.

Yet so many of us these days are thinking about ways to keep ourselves fed, housed, and employed. On the other side of the world, and by different means, folks struggle with the same challenges. The thought brings me full circle to the origin of this little rumination, which started this morning with my reading The Economist article about the expanding economic clout of Chinese workers. It is similar to the influence that American workers had on our productivity during our century and a half of dynamic expansion.

China has come a long way since those dark days of civil war. Haven't we all?
Posted by careyrowland at 12:33 PM