at The Cradle of Western Civilization

Back in the 1960's days of my youth I began what eventually became a lifetime study of history and literature. While studying classic English literature in college (LSU) I sometimes wondered why the great writers of British literature had such a fascination, almost obsession with, ancient Greek literature.
Yesterday I began to understand why.
When you actually go to a place like Athens and walk around for a day, your definition of literacy changes. You see how far back our quest for knowledge goes. You notice how different that quest was then, even though it now seems to be somehow the same pursuit.
While ambling on foundations (literally) of Western civilization established in Athenian ground 2500 years ago, you get an unfamiliar sense of time-travel, especially if you're an American like me. I grew up in a national identity that was only hundreds of years old instead of, you know, thousands of years old.
This sense of getting deep insight into the origins of constructive thought is probably similar to what the classic English writers--Shakespeare, Milton, Byron, Keats, Shelley, etc. etc.--felt when they came here.
It is a sense of this Culture thing that's going on in the annals of mankind--it goes back a long, long way!
What I want to do here is present to you three examples of this experience that I had yesterday.
1.
Pat and I stumbled upon (with a little help from a map) an ancient theatre, thousands of years old, where actual people who lived during that time came to see and hear actual plays being acted, like we would go to plays or movies today.

In the theatre pictured below, in this grandiose structure, playwrights of ancient Athens were amused as they watched ancient Athenian actors acting out on stage the dramas that they--the playwrights-- had written.
When I dabbled in classic literature, back in the day, in college, I read selections from very old plays or poems written by long-dead Greek guys like Aeschylus, Euripides, or Homer. When I was reading, on printed pages, their old dramas and stories--like Oedipus Rex or The Odyssey or whatever--the reading experience was rather shallow.
To see the place where those ancient Greek stories were recited or acted out--there's just something about it that propels the awareness of human story-telling into a new reality, a new appreciation for history that I never understood before. 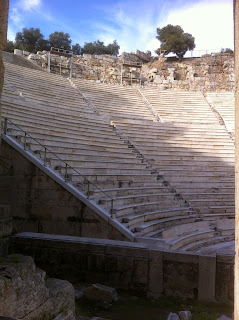 Doesn't that look just like a theater of auditorium in which you have been seated, having been perhaps assisted by an usher?
So that you see and hear some old story acted or sung about.
The urge to watch drama--plays or musicals of whatever fashion--goes back a long way! It's nothing new.
There's nothing new under the sun, as the ancient (even older than these Greeks) Hebrew poet Ecclesiastes noted.
What I am seeing is that, while the content of the narrative may change with time and fashion, the fundamental means of dramatic story-telling has changed not so much.
2.
This is true not only of literature, but also of military conquest and politics.
Pat snapped this picture of the antiquated structure called Hadrian's Arch. You see me standing there beneath the architecture. 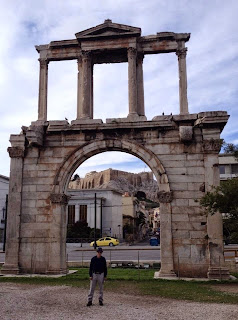 What's funny about this is, on one side of the arch the citizens of Athens had inscribed (only barely visible) this statement:
"This is Athens, the city of Theseus."
A few centuries later, the Romans came through and took over Athens. The Romans conquered the Greeks, or subjugated them, or threw their weight around in such a way that they wanted to demonstrate to the Athenians that the they--the Romans, new kids on the block of civilization-- were now in charge of things around here and so now we pre-Italianos would be in charge and things would be different around here and you better know who's calling the shots, if you know what i mean. And so, to make their point in an impressively architectural way, the Romans inscribed on the other side of the arch a new statement:
"This is the city of Hadrian, not Theseus"
I thought that was quite funny when Pat read it to me in the guide book.
3.
Here's a time-travel appointment with one more event that had happened in Athens, almost two thousand years ago. We were at a stony hilltop called Aereopagus. 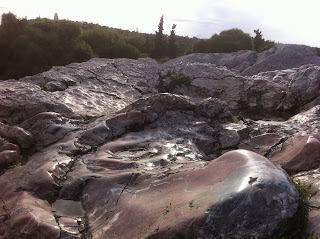 Yesterday I was standing here, looking at the marbly rocks of geological and historical time; the stones were worn smooth by millions of human feet that had trod there since the tree of knowledge was first encountered. Here, Greeks of long ago would gather to talk about the meaning of life, and probably drink coffee or wine, while discovering among themselves great thoughts of philosophy, history, politics, sports and bullshit and war and whatnot.
One day a zealous proponent of a new movement called Christianity came to town. He had come on a boat from Israel.
Paul had wandered in Athens for a day or two, and had heard about the serious pursuits of knowledge and nascent Western civilization that were taking place up on Aereopagus. So he went up there to listen, and to deliver a message to those sages. Here is (as recorded in a book, Acts of the Apostles) the beginning of what he told them:

“Men of Athens, I perceive that in every way you are very religious. For as I passed along and observed the objects of your worship, I found also an altar with this inscription, ‘To the unknown god.’ What therefore you worship as unknown, this I proclaim to you. The God who made the world and everything in it, being Lord of heaven and earth, does not live in temples made by man . . ."

But that was only another new beginning, even though it was in the middle of everything.
More to come. News at 11.

Posted by careyrowland at 10:30 PM