You can kiss ole George goodbye.

He was great as a Father to our country. He was courageous as Commander of the Continental Army, when they ran King George’s redcoats back to England.

As a legendary figurehead  of American leadership he has served well for over two centuries.

Young George’s honest admission about the cherry tree incident  still inspires us to honesty and integrity.

But as the face on the dollar bill, his days are numbered. 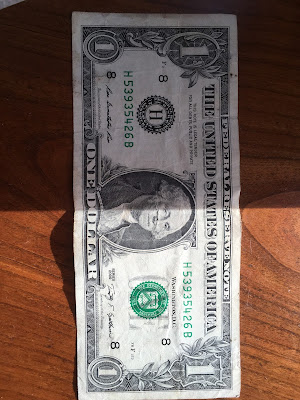 Most of your purchases are (are they not?) far beyond the 1-$2 range. And, think about it, what can you buy with a dollar bill these days?  A sugar drink at a convenience store? Probably not. They’ll supersize you into greater quantities of go-juice with your gas and you’ll be whipping out the plastic stripe.

These days all that used-to-be-money is just  swiped stripes and inserted chips and electrons flowing around the globe.

And that old greenback—what is it really? Used to be a silver certificate, then a Federal Reserve Note. Now the Fed has got the legal tender’s stability all figured out, so that the value of a buck walks a fine line between what it was last year and a what the CPI will allow you now.

Which isn’t as much as it used to be.

So these days we have, and have had for quite a while now, a comfortably numb currency inflation. That Federal Reserve Note in your pocket appreciates at a predetermined rate of 1-2% per year, and this calculated depreciation compensates for the variability of our paper dollar’s value since we ditched the gold/silver standard back in the 1960’s.

But I think this waffling Dollar will be with us for only a little while longer.

Washington’s greenback will probably float around until such a time as BrettonWoods doth move against Dunce’nGame for the last time. Then the weight of the world will be too much to bear.  Tensioned Tectonic shifts in the world’s monetary plates will render our legal tender to disability status, and those Federal Reserve Notes slipping in and out of international accounts will no longer be the world’s reserve currency.

’Tis then the Treasury will nudge Ole George into retirement. He’ll be on Social Security like the rest of us, with direct deposit, never even seeing the checks, never handling the cash, merely reaping the debit presence of those positive credit numbers. ’Tis then they’ll gently compel Ole George into retirement.  Maybe they’ll give him a gold watch for old time sake.

So long, George. We’ve felt so fat and happy having your pocketbook visage to enable our consumer shopping excursions. Your accomplishments have been Notable, expansive and historic, like Norman Rockwell scenes from our magazine covers and dime store excursions in all those bygone petrol-fueled Main Street purchase excursions.

Fare thee well, George. But I’ll never forget the smooth, crisp feeling of your fibered texture between my digits. Ah, those were the days, the dollar days!  https://www.youtube.com/watch?v=2KODZtjOIPg.

King of Soul
Posted by careyrowland at 12:55 AM