On the Rails of Old Memory


Memories linger mysteriously in our minds, sometimes like precious old photographs, sometimes like skeletons in the closet; they can hang around being stubbornly unpleasant and fearful, or they can shine happy and hopeful like a walk in the park in springtime.

I suppose most memories are intimately personal, but not all of them.

I feel we have collective memories, especially in this modern atmosphere of media saturation, where public events pry deeply into our private imaginations.

Most of us American boomers remember, for instance, where we were and what we were doing on the day that President Kennedy was shot in Dallas.

And we and our children remember, most of us, where we were and what we were doing on that fateful day in 2001—9/11 when the twin towers came down.

These collective memories are potent; they latch on to us; and while they do recede into dark tunnels they can be easily brought to the surface at the mention of those circumstances.

And we have, of course, powerful  personal memories from our own youth. Most vivid perhaps, are those that surround a first love or romance. These vague vestiges of the past are capitalized upon by our songwriters and movie-makers. Here’s an excellent example of a very special song about the mysterious aspect of memories.  It was popular when I was a teenager, Dusty Springfield’s Windmills of Your Mind.

But there is another kind of collective memory that goes back even further than modern pop-music or movies. It is tucked away in the crevices of history itself. And I find that certain settings or objects can serve as talismans through which human memories are passed from generation to generation and possibly from age to age, even from century to century.

You’ve heard of deja vu, haven’t you? That’s the feeling you can suddenly experience sometimes in a situation that you could not have been in because it took place before you were born.

This deja vu, which is French for “already seen”  is a feeling I get whenever I’m near or in an old train.

So yesterday I was uncovering some serious deja vu when I toured the North Carolina Transportation Museum which is located at an old, obsolete railroad service yard in Spencer, NC, near Salisbury. 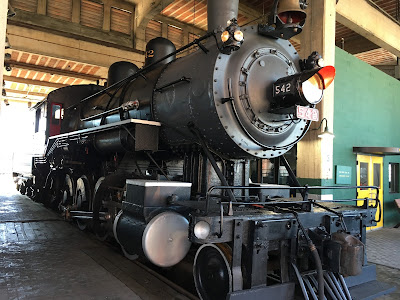 There is, for me, something very special about these old trains . . . something that stirs intensely in my soul pertaining to days long ago, in past centuries, when these steaming iron beasts roared across the vast landscapes of that hastily-industrializing age. The feeling that I get has something to do with retrieving past memories that I myself could never have experienced, almost as if the locomotives themselves were mnemonic repositories of 19th-century passengers who embarked to ride in those ancient passenger cars.

In the 2014 novel I wrote, Smoke, I attempted to capture this feeling in the story I was composing at that time. The collective memory, mentioned at the end of the scene described below, is implanted in Philip's mind when he grabs a brass handrail on a French train passenger car. The scene takes place in 1937, in Paris.  It depicts the beginning of a journey being taken by a young American and an old Frenchman who are about to travel from Paris to Lille, in northern France:

Half a morning later they were boarding the northbound train. By that time, whatever it was that had brought together this aged Frenchman and  his young, attentive American charge had been uncorked to its full expression.  The old fellow was intermittently pouring out his life’s vintage in a slow trickle of memory;  its balmy flow had begun to endow their embarkation with a kind of therapeutic anointing, the beneficiary of which was neither the young man nor the old, but that Man of the ages whose fermented wisdom percolated through deepened souls of both men.

Now they were walking beside the train, small luggage in hand. Pausing in mid-stride, Mel managed to recap, in the midst of crowd and bustle, a simple advisement that he had begun last night and had already landed upon this morning. “Half the battle in this life, I think, is deciding what to keep and what to let go. You have got to know when to hold them.”

They arrived at the railcar to which they had been billeted. Philip appropriated Mel’s briefcase, collecting it with his own, both in his left hand. Placing his right gently hand on Mel’s lower back for support, he waited patiently as the old fellow carefully climbed  onto the steps to ascend into their coach. As Mel’s bony, spotted hand grasped a vertical brass handrail inside the little stair, it seemed to Philip that the ghosts of ten thousand French souls were lingering there. The rail’s brass patina had been worn to a dullish sheen as ten thousand reaching hands had, in the beginnings of their ten thousand journeys on this train, taken hold of it. 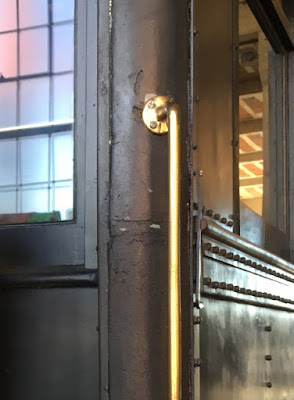 I felt like I, or somebody, had grabbed this rail before. The worn brass summons up a kind of  old, collective memory from days gone by.

I guess you'd have to be there . . . Maybe I was, in a sense, there, yesterday when I visited the Railroad museum.

Smoke
Posted by careyrowland at 2:59 PM