That’s the opening line in a song that Barbra Streisand sang in the musical movie, Funny Girl, back in the day, 1968.

She was addressing her request to  a matriarchal lady who used to perform a certain cultural role—pairing up a young woman with a young man for marriage— in the subculture of Jewish immigrants in New York City, sometime back in the early 20th-century.

I thought about that line while we were strolling through Valencia, Spain, yesterday. But my remembrance of the phrase was a little off the mark. I was singing it in my mind this way:

The reason is: everywhere I go in the world—and in life, generally— I see gaps, where there is space because something is missing, something that should be there, or that used to be there.

Here’s an example of a gap I saw yesterday: 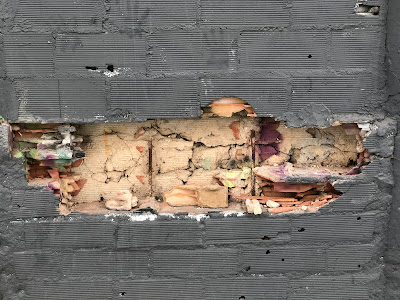 Apparently this problem of missing stuff is nothing new. The dearth has been going on for a long time. There are gaps everywhere, and going way back in time. A few days earlier, we came across this church structure in Madrid that had, indeed, been patched. 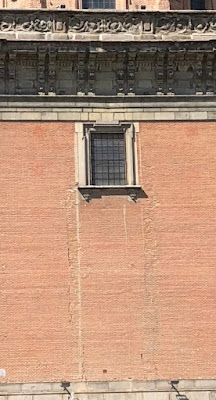 This phenomenon of filling spaces goes much farther, I have noticed, than just plugging physical gaps in buildings.

There are many, many gaps of all kinds in this world—many pieces missing from the puzzle.

Something is missing everywhere you go!

Everywhere we go, we find blank spaces that need to be filled with something—something appropriate, something—or some message—that is thought-provoking, or profound, or at least cutesy.

Consider this profound message that was filled in by some anonymous enterprising patchmaker.  I noticed it this morning on a wall in Valencia while we here having brunch at the Brunch Corner: 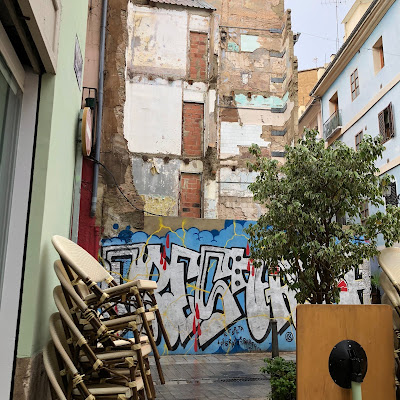 Pretty heavy stuff, don’t ya think? What a message!

Also notice, above the painted message, the broken-off walls in the background which certainly do need some patching or repair. I bet the owner of this broken-off building sings Funny Girl’s song:

But back to the painted message below the broken wall, next to the stacked chairs—take a look at it. Doesn’t the style of the lettering ring a bell somewhere in your mind?

Haven’t you noticed that, anywhere you go in the world, as you notice the messages posted in out-of-the-way places—places that need some kind of patch or profundity—there is always a graffiti written there, apparently written by the same person who has a very consistent, blocky style that he(she) displays on walls everywhere in the world?

You see this guy’s work everywhere! Check this out. I snapped the pic while rolling along in a Spanish train somewhere between Valencia and Barcelona. Don't be distracted by the reflection of interior train space at the top of the photo. Concentrate on the message! 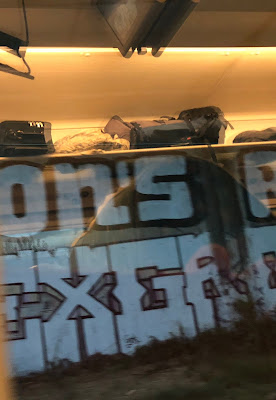 Whoever this artiste is that’s doing this work, I don’t know, but I think we oughta give him(her) an award, because he(she) really gets around, and does an incredible amount of work wherever he(she) goes, because (s)he always seems to get the message posted in the most unlikely places. (S)he must be the same person that Paul Simon was singing about in his song, the Boxer, when he patched into his Boxer song this phrase:

“When I left my home and my family, I was no more than a boy, seeking out the poorer places where the ragged people go, looking only for the places only they would know.”

I have noticed, you see, that this patchmaker person—whoever (s)he is— really gets around. Everywhere in the world, everywhere you go—her(his) work is displayed in out-of-the-way places.

You know what I’m talking about. You’ve seen Paco’s work. (I’m pretty sure his name is Paco.) I saw a bunch of his stuff today, painted onto concrete walls that line the railway, a place where no  regular people would go to, a place where only “the ragged people” would go to. 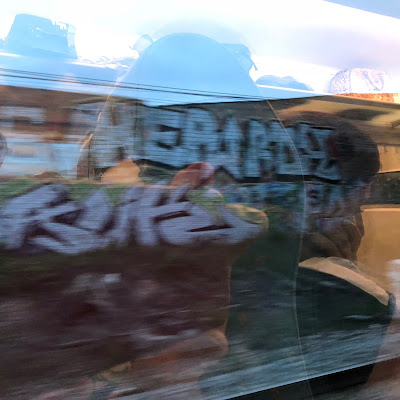 Wherever this guy Paco hangs out, I think the Academy oughta do a search on (s)him and give him an artiste award for patching in all the blank space between everything else that exists in the developed world.

Gracias, Paco! for all the work you do, and have done.

And as they say on Laugh-In, Salut!

King of Soul
Posted by careyrowland at 2:00 PM