Speculating on a Stratified Story 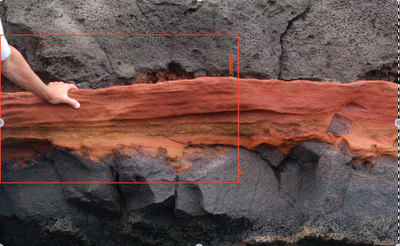 Wandering on a rocky Hawaiian shore we discovered this layer of red rock stratified between two layers of black rock. I was wondering, how did this happen?

I am no geologist, but I have done a little reading about the earth and the rocks within it, and some exploration, as you can see here. That's my hand in the pic.

In offering a layman's analysis of this geological puzzle, I must begin with a basic fact: The Hawaiian islands are all exposed parts of one very big volcano, situated on the Pacific Ocean floor three miles below the surface, but extending high enough to protrude into air.

In this particular case, the red strata, formerly hidden within massive black/gray lava fields on the edge of Maui island, has been exposed by the erosive action of nearby ocean waves that have been perpetually crashing upon these rocks for a long time.

What I do now about the black layers is that they are igneous rocks formed by volcanic lava, which had flowed from the erupting earth fissures many years ago.

I'm not so sure about the red streak. My investigating touch (shown above in the pic), indicated that the texture of the red rock is granular, sandy, which is different from the feel of the black layers below and above it. This apparently sandy composition may indicate that the red layer is sedimentary rock. If that is correct, we could say that the red, iron-bearing deposit was laid by weathering wind/water forces, and laid upon the black basalt lava rock below it.

Presuming that my sedimentary assessment contains, perhaps, a grain of truth, we could infer that the red streak may indicate a more recent epoch of time when the volcanic lava flow had ceased, enabling earth processes to leave something different for awhile--say, a few thousand years? I don't know.

A geologist could tell you. On the other hand, he may blow my whole theory to smithereens, just like the volcano, Puukukui, blew all that black rock into the location you see here.

Whatever that red layer is, obviously it was later covered by a another black volcanic lava flow, and thus was covered for many an eon until the Pacific Ocean knocked the shoreline around and taught it, and us human inquisitors, a thing or two. If you can help me interpret this stratified story, please do. Rock on.

Glass half-Full
Posted by careyrowland at 10:37 AM