What's a Vacation For?

Now that we finally got to July and being on vacation, I have at last gotten around to catching up on a few personal projects that I would like to have undertaken long ago.

One project is learning how to actually make best use of the Macbook Air that I've been blogging on for two years now. Two and a half years, actually. Micah gave me the laptop at Christmas 2011. I've been stumbling around on it ever since, managing every now and then to get a word or two that made some sense out on the 'net for all the world to consider. haha.

On this vacation, my brother-in-law John, the Mac guy, has been very helpful in this personal proficiency-improvement project, especially with utilizing the pictures from iPhone that I've been snapping to elucidate our Costa Rica vacation.

In the midst of this steep learning curve, a picture popped up on one of the Mac files, a picture that I had forgotten about, thought I had trashed forever, except that lo and behold it is still rollin' around in the Mac and so I managed to pull it out of the trash. Pat took the pic exactly two years ago on Maui, Hawaii, at the Sun Yat-Sen park, which is a small memorial to the founder of modern China, Sun Yat-Sen. Here is his statue, with me standing next to it because I think Mr. Sun was a great leader: 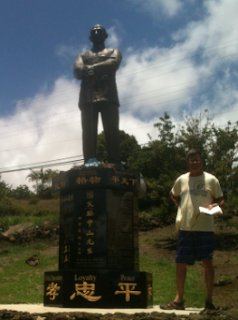 A little research I've done today uncovers the impressive fact that both the major factions of modern Chinese liberation--the Mao-led Communist party and the Chiang Kai-shek-led Kuomintang-- claim Sun Yat-Sen as a major contributor to their initial movements to wrestle the governance of China from the dying Qing dynesty, because Mr. Sun led the revolution that knocked the Qing out of power in 1912.

Another reason I think he was a great leader relates to a quote from him that I discovered on this very same statue-base in Hawaii two years ago. The quote is carved into one face of the statue's base:

"Search into the nature of things, look into the boundaries of knowledge, make the purpose sincere, regulate the mind, cultivate personal virtue, rule the family, govern the state, pacify the world."

This principle(s) have been bopping around in my mind for these last two years. When I saw the pic pop up in my Mac wanderings today, the profundity of this wisdom suddenly came back to me. So I spent a couple hours today trying to find the source of the quote, which turns out to be not Sun Yat-Sen himself, but rather Confucius, in an old classic called The Great Learning.

I learned this when a google search finally led me to a pdf from a biography of Sun Yat-sen by a Stanford scholar, Marie Clare Bergere. http://books.google.co.cr/books?id=vh7M1u4IGFkC&dq=sun+yat+sen+%2B+nature .

The idea of "searching into the nature of things" is one that Mr. Sun made a central part of his own way of relating to the world and trying to make it a better place. I like that strategy, and it is the essence of my writing projects, the blogging as well as the novels.

Here is another pic from that Hawaiian adventure two years ago, just to illustrate what I mean by looking into the nature of things. This pic reveals just how everything, including the earth itself is just kind of. . . stratified: 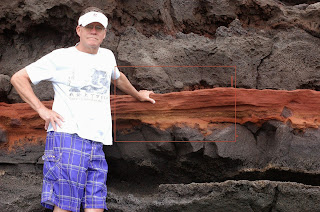