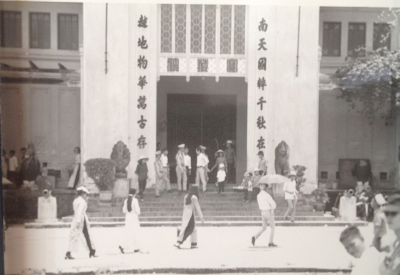 When Johnny came marching home again it was in 1971, although really, there was no parade.

He wasn't actually marching, anyway, but rather flying commercial out of Vietnam on a PanAm from Cam Ranh Bay. The jet featured American stewardesses, and this was a very favorable detail that our exiting guys did not fail to notice as they soared off to Pacific destinations and ultimately all the way back over here to the good ole USA. It was a long flight from the war, and a long time to have to watch stewardesses traipsing up and down the carpeted aisles, serving food and drink; but our guys managed to get through it.

My old friend Johnny's departing flight from Vietnam was a reversal of his arrival there, a year earlier, on a commercial US aircraft.

But here's a curious fact that he confided to me. The "scaredest" he ever got while in Vietnam was on that first day, during the jet's approach into Cam Ranh, because the descending plane was drawing enemy fire!

Last week, during the first days of October 2016, my old neighborhood friend Johnny told me about his one year tour in Vietnam. He lives in Louisiana, where we both started life; now I live in North Carolina. We brought our wives and had a Florida panhandle reunion at the beach.

We were chums in high school, but after our graduation in 1969 he went his way and I went mine. I went to college; he went to Vietnam.

I was protesting the war; he was over there in the middle of it.

Before last week, I had not seen Johnny since about 1975.

Now I'm writing a novel about that period of time, and about some of the differences--and reconciliation-- between those two diverging groups--"them that went" and "them that didn't."

As it turned out, Johnny's year of duty at Tan Son Nhut Air Base, just north of Saigon, was, he admits, easier than the brutal combat some of our guys had to endure out in the jungles while they were on patrol being relentlessly pursued by the silently stalking Viet Cong.

During our time of defending the former Republic of Vietnam, tons and tons of weaponry, machinery, and supplies had to be delivered into the country to supply our people there. Tan Son Nhut was a busy location for transport and communications, and we needed a lot of guys on the ground to keep systems oiled, protected and combat-ready. My friend Johnny was one of those men.

During high school, Johnny had acquired some work experience in appliances and refrigeration. After our high school graduation he was not inclined, as I was, toward college. He worked for a while. Then he saw, you might say, "the handwriting on the wall" about how career choices were shaping up in 1969-70. So he volunteered for the Army. After boot camp at Fort Polk (Louisiana) and some duty-specific training at Fort Belvoir (Virginia), he shipped out, which is to say, he was put on a flight path that landed him at the Cam Ranh Air Base where they almost got shot down before setting foot in the infamous theater of Vietnam. 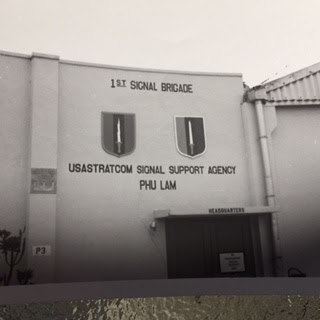 When my friend arrived at his post on the perimeter of Tan Son Nhut Air Base, he spent a year on guard duty, keeping watch over the rice paddies and distant jungles beyond the fence, and reporting whenever mortar fire or any other unfriendly thing was approaching the air base.

Inside the base, there were moments when our guys could take a little time off. Here's a pic that Johnny snapped; it depicts a recreational session of high-stakes card-sharking, with maybe a little bluffing and probably some bravado bullcrap thrown in to keep the game interesting. 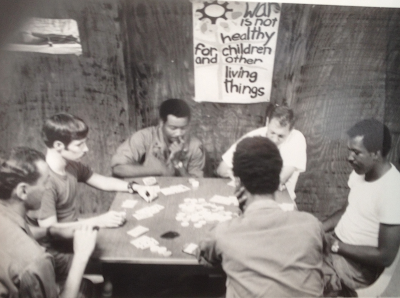 Here's a pic of Johnny, taken when he had only been in Vietnam a few days. 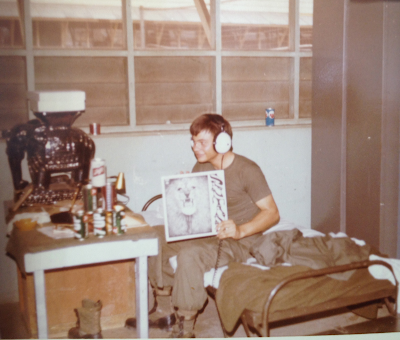 Last week, after Johnny showed me a few hundred photos that had been stored away at his home, I thanked him for taking the time to meet me in Florida so we could talk about Vietnam.

Because I can't write a book about what was happ'nin' in the USA in 1969 without talking about Vietnam. I also thanked my friend for his service to our nation.

If you were a college kid like me in the 1960's-'70's, you will find it well worth your time to visit a few of the men and women who did not do college at that time, but who served--by choice or by draft--in the military. Right or wrong, won or lost, however you call it, they did what our country called them to do.

We may need many more like them before it's all over with.

King of Soul
Posted by careyrowland at 8:45 AM