For many, many years I have wondered about Peter Yarrow’s mention of “a land called Honah Lee,” in that silly old song he wrote about a dragon named Puff.

Just yesterday I was wondering as I wandered along the shoreline of Hanalei Bay, Kauai, Hawaii.

While vacationing on the north shore of Kauai I had been feeling a little constricted by the touristy setup there. It was obstructing my sense of adventure.

So, busting out of conventionality, so stealthily did I violate the boundaries of tourist propriety by launching into an unauthorized jungle trek. 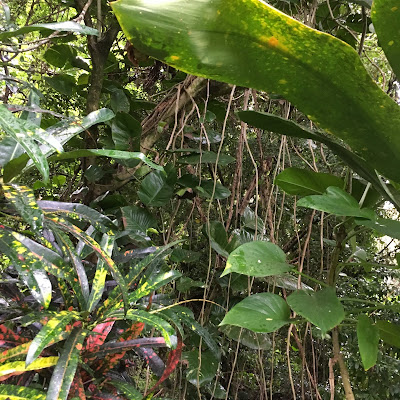 Past the condos and the pool and the shuffleboard court and the boats-for-rent and the obligatory paraphenalia of predictable recreation, I stepped stealthily into a kapu area of overgrown, untended wild Hawaiian hoohah!

Through broadleaf wild flora damp with recent rain I did venture, stooping beneath gangly trees, tromping around some ancient black volcanic boulders and fearlessly bounding over others, I hazarded the uncharted course I had serendipitously set for myself, plodding along the secret shore, and footprinting wet brown sand, I splashed forth  through shallow wavelets along the neglected eastern edge of Hanalei Bay.  This untamed pocket of Hawaiian paradise has somehow proliferated between two resortified developments of American flimflam.

’T’was then the dragon entered my mind:

"Puff the magic dragon lived by the sea,

and frolicked in the autumn mists of a land called Honah Lee."

Here was I, perchance, sauntering adventurously through the last wild boundary of Hanalei Bay, maybe a little like the legendary Puff in that old classic Peter, Paul and Mary song:

Within the deep recesses of Baby Boomer recall, Puff the Magic Dragon still yet  blows through, across an ocean of imagination. Can you hear the tale?

and brought him strings and sealing wax and other fancy stuff.

Together they would travel on a boat with billowed sail;

Once upon a time, when there was as yet no jet-plane, no cruise-boat, no trans-Pacific ocean liner. . . long, long ago while approaching an island far, far away, during an age in which the only transport to these remote islands of Hawaii was by sailing ship. . .

and brought him (from highly developed, civilized countries far, far away) "strings and sealing wax and other fancy stuff."

Do kids these days even know about strings and sealing wax? This is ancient legend stuff. I mean, who uses strings and ceiling wax these days? Who folds an envelope and closes it and then affixes the back flap with a buttoned string and a blob of richly-colored wax impressed with a regal insignia?

Nobody I know of. You?

These were communicative implements of a by-gone age, when persons of certain authority or rank used strings and ceiling wax to assure a remote recipient that the letter or parcel being hand-delivered had originated with the accredited sender.

Such strings and sealing wax were used in centuries long gone, when mighty sailing ships voyaged halfway around the globe from London or Lisbon or Boston or some such port of great commerce.

Those majestic ocean-going vessels would arrive with pomp and fanfare at many  an exotic destination along the way, where fabled creatures inhabited magical shores, places where a fast-industrializing world had only recently managed to  impose  its rigid demands of productivity, efficiency and conformity on clueless, unsuspecting noble savages such as Hawaiians were when all this commercializing globalization had only just begun.

Puff the Dragon was the quintessential  wild uncivilized creature of old; he held sway over that formerly vast, untamed region where primeval legends prevailed, as yet unspoiled by modern mediocrity, a time and place where magic and myth, not capitalizing pragmatism, still reigned supreme.

So, in the 1950’s-60’s televised commercialized USA where young Baby Boomer imaginations ran wild with the likes of Mickey and Minnie and Davy Crockett and the Jetsons and the Flintstones . . .

Little Jackie Paper, the nascent civilized child, found Puff among his privileged playthings. And letting his imagination run wild, he frolicked with Puff in the autumn mists of a land called Honah Lee.

For a few years, he made play of Puff— until young Jackie decided to move on to bigger and better pursuits . . . baseball, hot dogs, apple pie and Chevrolet, Elvis and the Beatles, Mustangs and Volkswagens,  Lost in Space and lost in purple haze,  caught up in fantasy and privileged college days, gathered up in protests and rockfests and counterculture forays, and eventually outgrowing even all that stuff and finally picking up the better “toys” of governments and companies and  corporations . . .

"A dragon lives forever; not so little boys.

painted wings and giant’s rings make way for other toys.

One grey night it happened; Jackie Paper came no more,

and Puff that magic dragon ceased his fearless roar."

Surely we now understand this about Peter Yarrow’s classic song of forsaken childhood innocence: In the end, Puff ceased his roar because . . .

Jackie ceased his playing. The roaring voice that had bellowed was not Puff's at all; it was young Jackie's intonation of Puff’s imagined roar.

Remembering this old tune while trudging along Hanalei bay. . . dredges up old memories.  My feeling is that the quaint longevity of this simple song slips up from beneath the surface of a sea deeper  than mere child's play.

It is a longing for the past; it is a vague recollection from our collective vault of  wishes and dreams; it is a pining away for a former age of mankind, a time when the people who were in charge of things were benevolent and empathetic, a Camelot time before the brouhaha of democracy, a Shangri-La time before the anarchy of revolutions, before the abuses of communism. . . a simpler, Arcadia time before everything got so complicated and leaders were not so self-infatuated, a time when . . .

"Noble kings and princes would bow whenever they came;

pirate ships would lower their flags when Puff roared out his name."

King of Soul
Posted by careyrowland at 11:54 AM