Long, long ago and far, far removed from this present day and time, it is written
that our ancestress Eve was pondering an apple or something similar
on the infamous tree of knowledge of good and evil.
Whilst she pondered, neither weak nor weary,
o’er forbidden fruit of not-forgotten lore,
suddenly there came a hissing,
as of someone gently kissing,
kissing her cognitive mind
with a curious temptive find.
Her visitor, the serpent, was speaking.
Thereby was her curiosity peaking,
and as her imagination was being fed,
the subtle serpent said
take a bite
it’s all right.
If you do it, your eyes will be opened.
So she did, and they were;
her eyes were opened.
Meanwhile, back at the Eden ranch,
her significant other was wondering,
What’s up with Eve?
Where’s my woman to whom I cleave?
So he ambled over to that mysterious tree
to see
in what circumstance his Eve may be.
And there he found her partaking
and little did they know that history was in their making
when Adam grabbed the thing and took a bite
from that forbidden fruit which expanded their sight
because the serpent had said it would open their eyes,
as Genesis says indeed it did open their eyes,
so now they would know not only good but evil as well
and so from that pivotal tasting 'til now, all hell
breaks loose;
hence all the bad news
from then till now,
and all the trouble that human traffic will allow,
which only goes to show
what maybe you already know:
A little knowledge can be a dangerous thing. 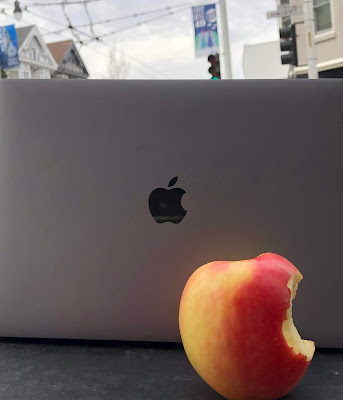 So regarding any fruit therein you find
be judicious and take your time.
Don’t partake of anything in haste;
Be careful what you taste!
In the web of evil and good
be careful to partake of what  you  truly should.

So this ancient lesson to your mind I bring:
A little knowledge is a dangerous thing.

Posted by careyrowland at 4:20 PM