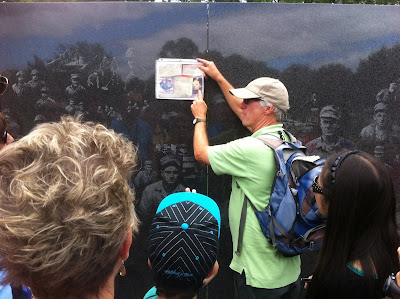 I was awakened in the middle of the night, or the wee hours of the morning, whatever you call that time. There was a memory in my mind of being in a military boat, one of those assault vessels that was used back in the day when our guys hit the beaches at Normandy in order to initiate the grand invasion, the terrible task of running the third reich out of Germany.

I do not know how or why this memory, or dream or whatever it was, happened to me. I have not served in the military. What is most vivid in this slumbery experience was the feeling or knowledge that I was entering into a battle zone with a clear understanding and extreme fear that I might not come out of this alive. And that I might just dash up onto that beach, weighed down with all this gear, and that all these bullets flying at us--that one or two of them might hit me and that would be the end of it for me.

Maybe I was having this fearful thought or dream because this D-Day thing, like 9/11 or the Kennedy assassination or some such other collective memory, is part of our national subconscious and it is a thing that pops up every now and then from deep down under the surface of things.

I don't think this occurrence was random. It was probably triggered within me by some recent images in my mind from movies or video or what I've been reading or what I myself have written about in the novelistic pursuits of my research. I have to take note of the fact that I did watch Thirteen Hours four nights ago, the movie about Benghazi in which there was some graphic combat imagery portraying the heroic acts of our guys that defended the American outpost there on that fateful night back in 2012 when four of our people did not get alive out.

Maybe that's what it was; maybe there were other imagery elements of warfare floating around in my mind, our mind, pertaining to our collective experience as a nation, a people, or a culturally Western retention of the akashic records. Maybe it was the documentary I watched yesterday evening about the terrorist massacre at the Charlie Hebdo magazine office in Paris about a year ago.

Maybe it was because I was watching an episode or two of Foyle's War a week or so ago, which is one of those understated British TV series about a stiff-upper-lip detective during the time of WWII. His home and work, in the show, is in Hastings, Sussex, England, on the Channel, across from Normandy, and many of the show's story lines are closely connected to WWII strivings.

Or maybe this dream visitation was because I was reading, last night, Charles Taylor's massive historical study, A Secular Age,

in which I encountered on page 409, and pondered, this thought:

"In a sense, the terrible trauma of the First World War was paradoxically resolved at least in part by the Second. This is because it really was a war to defend civilization. Hitler brought reality dow to match and surpass the war propaganda of the previous conflict. This, plus the moral discrediting of Communism, emptied the ranks of extreme Left and Right . . ."

Now that Left and Right are at each others throats again, we wonder if somehow this ancient Contention is cyclical in history, or is this just the human condition in which we are always and always have been on one side or the other in the grand struggle of right vs. wrong, good vs. evil, etcetera etcetera etcetera and so on and so on,

As Peter, Paul and Mary sang back in the day, when I was coming of age, Take your place on the great Mandella.

or maybe its just that the entire Western world is at a crossroads now that so many are actively rejecting our Judeo-Christian substratum in order to have it surreptitiously replaced with Imamic balderdash.

I will end this little rabbit trail meander down collective memory lane with a pic (positioned at the top of this posting) that we snapped at the Korean War memorial last summer. In the photo, we see an eerie kind of mingling of past and present souls, a mixture of imagery from our brief stop during a Washington DC tour, and a memorial of sacrificial service that took place in a war on the other side of the world while I was being born in 1951.

Maybe that's it--something to do with being born, or dying. . .

Smoke
Posted by careyrowland at 5:12 AM