Franz Josef had a nephew named Ferdinand, whose place in the extended family would later qualify him as the heir to the throne at the occasion of Franz Josef's death. 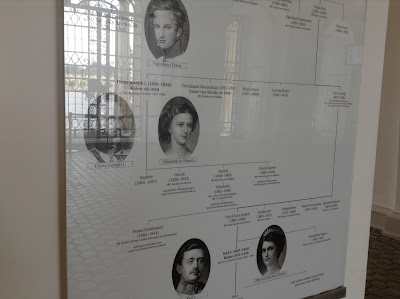 But Ferdinand never ascended to that throne,  because he was assassinated in 1914. This assassination happened in Sarajevo, Serbia, on June 28, 1914. It is considered by most historians to be the fatal event that sparked the powder-keg of militarized Europe and ignited World War I.

But before all that, when Emperor Franz Josef was still ruling over the quasi-peaceful Austro-Hungarian empire, and the Hapsburgs were still lolling along as royalties habitually did, the royal family spent their summers at their summer palace near Vienna.

It is a place called Schonbrunn. 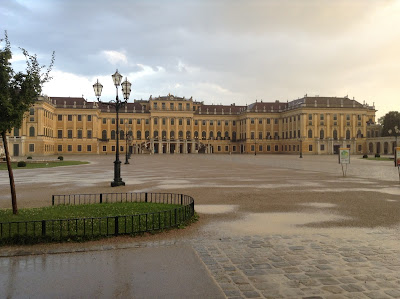 We visited the palace at Schonbrunn as tourists. As I was walking through the "royal apartments," the audio-guide mentioned that Franz Josef was a real go-getter when it came to performing his roles as Emperor. I got the impression that he was a workaholic monarch who spent his entire day, every day, dealing with matters of state. It makes sense if you think about it, because. . .

Ruling over an empire is no easy task. But in fact, it ultimately proved to be an impossible task. After his nephew Ferdinand, the heir, was assassinated, things really got out of hand for Franz Josef and the Hapsburg monarchy.

The whole royal arrangement really started to unwind when he demanded restitution from them upstart Serbs down there in Sarajevo who had shot his nephew.

But a Serbian concession was not going to happen. The Serbs did not like being subjects to Austrian control; they wanted to have their own country. Franz Josef's ultimatum soon became a declaration of war.  Next thing anybody knows, there's a whole damn alliance-mongering world war exploding all over the place, because one very important man was shot to death.

Cutting toward the chase here, I must say that about half-way through that war, the old Emperor Franz Josef died, in 1916. So the Austro-Hungarian Empire was in need of a new Emperor.

But nephew Ferdinand, the would-have-been heir, could not ascend to the throne at that time, because he had been assassinated.

Therefore, the scepter of royal authority of the house of Hapsburg passed to another nephew, Karl. Karl was the nephew of the nephew and therefore the next in line to be Emperor of the Austro-Hungarian empire.

But this would be no easy task for young Karl. The prospect of assuming that royal authority must have been, in the wrath of an escalating world war,  akin to accepting the gift of a hornet's nest. Most all the European potentates and their armies were mad as hell at the German Kaiser Wilhelm and his Austrian co-potentate, the erstwhile Emperor of Austria-Hungary. The wrath of Republican Europe was fast mounting fiercely to dismantle their Entente Axis of presumptuous military power.

But at a terrible cost: millions of lives perished in World War I.

Emperor Franz Josef's death in 1916, only half-way through the hostilities, was for Karl, more an overwhelming burden than some whoopdeedoo ascension to kingly privilege. His uncle's prickly challenge to the Serbs had rendered Europe into a grand bloody mess.

So in the year  1918, a scant two years after his accession to the throne, Karl was in no position to wheel and deal on behalf of Austria, or Hungary, or his supposed royal realms, or any other entity except, perhaps, for his immediate family. He was between a rock (Germany) and a hard place (the Allies who were hell-bent on demanding reparation from Germany and Austria.)

This was no easy position for a young monarch to be in.

As we traipsed through the royal apartments of Schonbrunn last Monday, the audio-guide informed me that I had just entered a certain room where, in 1918, a gang of both friends and foes of the Emperor had presented to young Karl his choices pertaining to the Empire.

Karl's choices were not pretty. The military leaders, diplomats, politicians in that room told him that they were taking the whole damn empire away from him and his family. He was in no position to argue with them, so that was where it all ended for the Hapsburgs. Therefore he had no choice but to concede to their demands.

So Karl and the Hapsburgs lost it all, right here in this room.

Except one thing. Karl refused to abdicate. He managed to slink away still having his title.

Whatever that means, I thought, while standing there with all my fellow-tourists in the room where a 600-year empire had ended. Karl would still be Emperor, but emperor of what? His own kingdom exiled him.

At that moment, I accidentally snapped a contraband photo: 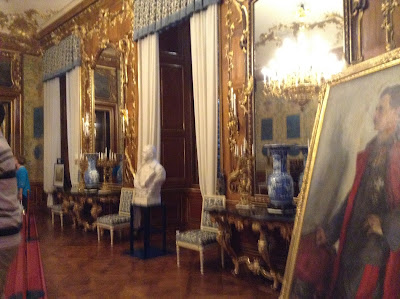 This is where it all ended for the legendary Hapsburgs. As cousin George said later, all things must pass.

Smoke
Posted by careyrowland at 9:38 PM