Once, but maybe never again,
two men
standing in the cold
one young and one old; 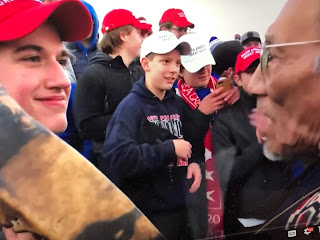 they meet
but decline to greet
in the middle of a confrontation
on hallowed ground of a dividing nation.
They do not speak,
for all around them arise a peak
of anger and resentment—
a country devoid of contentment
in the cauldron of history.
Seems now it’s become a mystery
what has become of our unity,
as now we’re obsessed with impunity—
blame the younger, not the older one
as the chieftain wordlessly beats his drum;
but while the young man struggles to maintain a smile
the world wide web spews a viral pile
of all the blame that’s fit to hint
as talking head trolls make their dent
in the warp and woof of the data tide
in which we slavishly slouch to hide
the downing of civility
and the haughty thrusting of hostility.
We ride the wave of accusative gestalt—
let us assign a verdict who’s at fault.
But whose fault it is I think i know;
let’s blame it on the undertow
of madmen on the right
pulling young men into the fight,
or maybe let’s blame it on the leftist cadres
who would depose those maga padres,
while all the while the widening gyre
spins up in streaming twitter fire.
Hourly it whirls higher higher
while all the while it was nothing more
than a clueless kid who for one moment tore
our torrent stream of data angst asunder,
generating for a moment some online thunder.
So what once was our peace and tranquility
slips beneath the dearth of our virility.
’Twas on a cold gray day, I say,
we beheld it— but  for never again—
those two brave men
standing in the cold,
one young and the other old.

Posted by careyrowland at 10:26 AM