I wrote a story about an American traveling through Europe in the spring/summer of 1937. In the novel, Smoke, which I published in 2015, young businessman Philip Morrow accepts an unusual errand, which takes him through London, halfway around the far side of France, then to Paris, and ultimately to arrive at a place called Flanders Field in Belgium.

At his specific Memorial battleground destination, Philip sees for the first time the final resting place of his father, a soldier of the American Expeditionary Force, who had died there in 1918 during the last week of World War I.  Philip had been eight years old in 1917 when he hugged his pa for the last time, then  beheld  his mother while she tearfully embraced her  husband, a mountaineer marksman named Clint.

In chapter 27 of Smoke, Philip arrives at the Memorial cemetery accompanied by a newfound friend, Mel, an old Frenchman who expresses his appreciation for Clint's courageous sacrifice--given in his last full measure of devotion-- for freedom, to defeat tyranny.

Clint's total offering in 1918 was not the first, nor the last, to be put forth by millions of other soldiers since that time. In Washington DC, I snapped this photo of a newer Memorial--that one constructed for us to remember the dead of Vietnam. 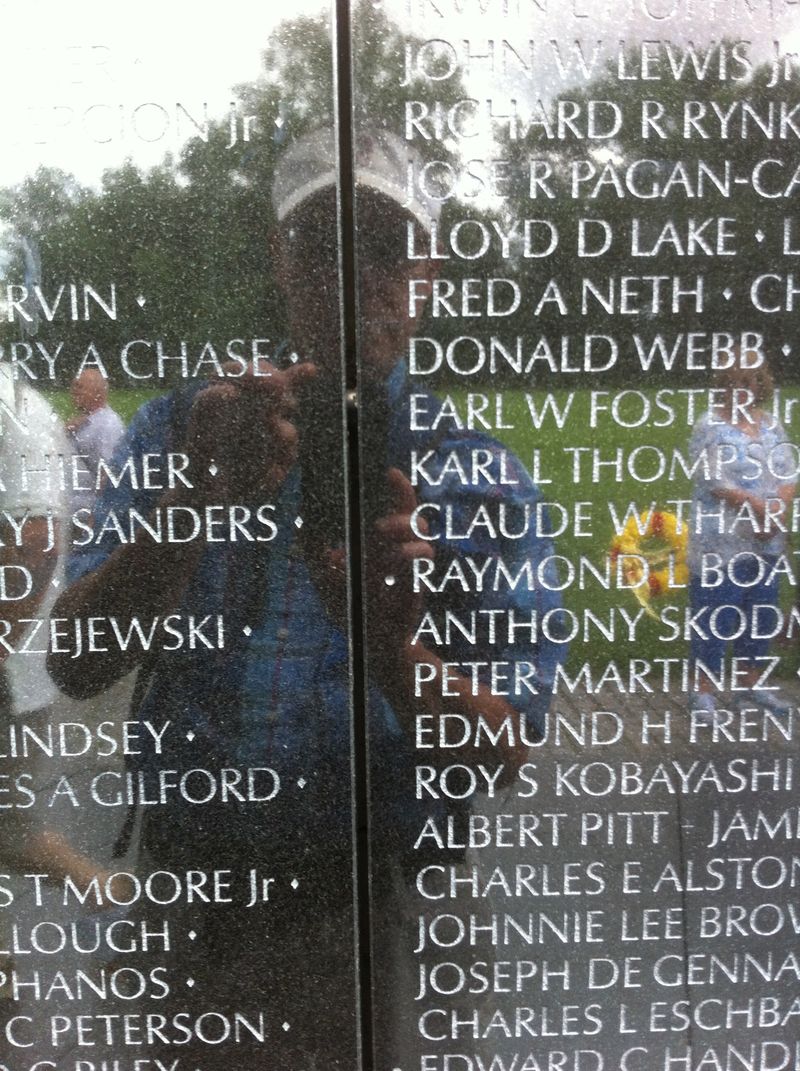 We Americans do appreciate the families left behind.  Their sorrow and sacrifice is painfully precious; it  runs deep--deep as the blood that pumped through soldiering bodies alive with determination--blood that still streams through the beating hearts and minds of  us Americans and Allies.

Here's my offering, from chapter 27 of Smoke:

“How could this place have been a battlefield for a world war?”
'The old Frenchman cast his eyes on the passing landscape, and seemed to join Philip in this musing. He answered slowly, “War is a terrible thing, an ugly thing. I did not fight in the war; I had already served my military duty, long before the Archduke was assassinated in Sarajevo and the whole damn world flew apart, like shrapnel. But I had many friends who fought here, and back there, where we just came from in my France, back there at the Somme, the Marne, Amiens. Our soldiers drove the Germans back across their fortified lines, the Hindenberg line they called it. By summer of 1918 the Germans were in full retreat, although it took them a hell of a long time, and rivers of spilt blood, to admit it. And so it all ended here. Those trenches, over there in France, that had been held and occupied for two hellish years by both armies, those muddy hellholes were finally left behind, vacated, and afterward . . . filled up again with the soil of France and Flanders and Belgium, and green grass was planted where warfare had formerly blasted its way out of the dark human soul and the dark humus of lowland dirt and now we see that grass, trimmed, manicured and growing so tidily around those rows of white crosses out there, most of them with some soldier’s name carved on them, many just unknown, anonymous, and how could this have happened? You might as well ask how could. . . a grain of sand get stuck in an oyster? And how could that oyster, in retaliation against that rough, alien irritant, then generate a pearl—such a beautiful thing, lustrous and white—coming forth in response to a small, alien presence that had taken up unwelcomed residence inside the creature’s own domain? The answer, my friend, is floating in the sea, blowing in the wind, growing green and strong from soil that once ran red with men’s blood.” '
"Now they were arriving at the battlefield. Jacques parked the car, leaned against the front fender, lit a cigarette. Mel and Philip walked through a stone arch, along a narrow, paved road lined with flowering linden trees, spring green with their large spadish leaves, sprinkled with small white blossoms. The sun was getting low behind them. Shadows of these trees had overtaken the narrow lane, turning it cooler than the surrounding fields, acres and acres neatly arranged with white crosses and gravestones, and continuous green, perfect grass between all. Having reached the end of the linden lane, the stepped slowly, reverently, along straight pathways, passing hundreds of silent graves on either side. The setting sun was still warm here, after their cool approach from beneath the trees.
"At length, they came to the row that Philip had been looking for, the one he had read about in the army guidebook, where his father’s grave was nested precisely and perpetually in its own place in eternity ". . .

King of Soul
Posted by careyrowland at 12:23 PM