Ritual and Renewal in Christendom

I was raised in the Catholic Church, and my wife was too. That was a long time ago.

During the 35 years of our marriage, we've been intimately connected to a group of Protestant Christian believers. Our group spends a lot of time reading the Bible and discussing the revelation, poetry, prophecy and history that is documented therein.

Our literate emphasis on the Bible, the printed Word of God, has not always been the main thrust of the Christian religion. Widespread reading of the Scriptures only came to the forefront in Christian life during the Protestant Reformation, which was led in the 1500's by Martin Luther, John Calvin and many other outspoken reformers.

There's a historical reason why the Reformation, and the Renaissance before it, happened when it did.

About a hundred years before Luther ignited the Protestant Reformation, Johannes Gutenberg's invention and development of the printing press had begun forging new paths of communication. This new printing technology would greatly proliferate literacy, and the use of the printed word, for centuries to come. The expanded use of printed Scriptures fundamentally changed the Christian religion; it was similar, in a way, to the way digital media has profoundly altered communication during our times.

But before that 16th-century revolution in literate religion came (enabling Christians to sit around discussing the Bible), there was the centuries-old Practice of Religion, and a major part of that religion was Ritual.

Jesus Christ's crucifixion and resurrection is plainly told, for all to see and read, in the four Gospels of the printed Word. We take this for granted in the 21st century, as we did in the last century when I was growing up.

My Catholic childhood practice of religion was absolutely defined by the Mass, which is a ritual that had originated in the events of Christ's sacrifice, but was later morphed during 1900 years of time into a prescribed, elaborate ceremony. The original purpose of the Mass was to tell the story of Christ's sacrifice on Calvary, in Jerusalem. But as that Mass came down through the ages, the cognitive element (understanding what actually happened at Calvary) was draped (rather mysteriously in my young consciousness) in ceremonial robes, and spoken in a language--Latin--that I did not understand. And so the Mass became, for me and for millions of others, something else. It became a Ritual.

In my young soul, this produced reverence, and a kind of faith--not a faith of understanding, but of. . .ritual, and yes, belief.

I'm not rejecting ritual altogether. I believe it is a profound component of human community, and can be a pathway toward faithful worship. But my turning, in early adulthood, to (what is called Protestantism) the Scriptures, instead of the Catholic (or HighChurch) ceremonial practice, has been quite productive, and beneficial in how I have lived life.

When Pat and I visited Greece and Italy a few of weeks ago, I was enlightened about all this. It was a kind of epiphany.

In Athens, we saw: 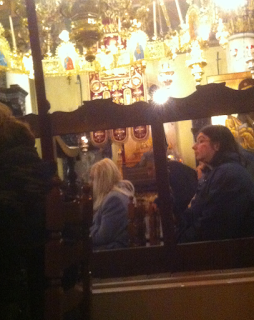 I snapped the image in a Greek Orthodox church.

A week later in Rome, we saw: 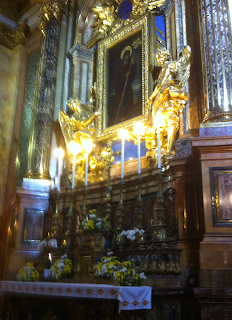 This image is from a Roman Catholic church.

These two pix cannot portray the meaning, nor the reverential profundity, of worship as it regularly is offered in Orthodox and Catholic churches of the Old World, and still today through the whole world. But they are a visual indicator of the cultural legacy, and the experiential intensity, that accompanies ceremonies in both major strains of Christendom. (Greek Orthodox and Roman Catholic parted ways during the 11th century A.D.)

I will cast no judgement about the formal traditions of my Christian brothers and sisters whose faith is framed in the Old way of worship. I suppose what they are doing may reflect more perfectly what we will all be doing in heaven someday.

These reverential musings, which were recently initiated for me in Athens and Rome, have marvelously, perhaps Providentially, landed on this screen just now, for you to see. Now I will bring this ceremonial sojourn to a visual cadence with . . . one more picture I snapped; it expresses my feeling about our colorful Christian faith, which is visible to those who watch attentively, in the midst of a tragic, and dreary, world. 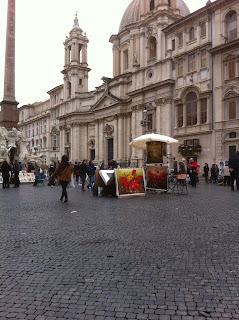 Glass half-Full
Posted by careyrowland at 11:32 AM