What Glezos the Greek says


Nursing homes across the world are full of old folks who would love to tell you a thing or two about how things were back in the day. But how often does someone (you or me) stop to listen to their incomprehensible memories? It seems they are just rambling on about things that happened seventy or eighty years ago.

For most young folks these days, including me at age 63, life seems to be whizzing by at 70 miles an hour. So why should we spare the time to consider what events were shaping the world 70 years ago?

Nevertheless, such shared recollections can happen, and be beneficial, and even in a very big way.

Take, for instance, the infamous Greek Debt Crisis. In the midst of it, here's one old Greek over in the left corner going on and on about stuff that happened 70 or 80 years ago. What's his problem?

Well first, we need to understand that the old guy is not just any old Greek. This man was there when "it" happened, and he lived to tell about it.

"It" being Nazi occupation during the Second Big War. Mr. Manolis Glezos was there, and he did live to tell about it. And he wants you to know about it.

You should know about it.

Mr. Glezos was not only there when the Germans took over Greece in 1941-- he resisted the Nazi way of doing things in a very big, and public, way.

Now we know the situation in Greece has greatly improved since those dark days of the Second Big War. Make no mistake about that. But push comes to shove in this debt-burdened year of 2015. Half of Europe (the northern half) is twisting Greek arms for repayment of huge, admittedly irresponsible debts.

So it's no surprise that an old geezer like Manolis Glezos would remember--and call the world's attention to--what Europe and the Greeks did to bail Germany out of their failed attempt to conquer the world back in the day.

1953, to be exact. That was the year of the Agreement on German External Debts.

But is debt forgiveness that was given to Germany in 1953, a few years after the Second Big War, even relevant in today's fast and furious world?

You bet your sweet drachmas it's relevant! Lest the Greeks be forced to drop out of the Euro and fall back into their drachmas, leaving the other Euro nations with a dismembered collection of blithering technocrats.

Mr. Manolis Glezos, now the grand old man of the Syriza party, ought to be pleased about how far we've come since 1941, and here's why: His now-majority party, and the Greek people, are presently contending with EU technocrats and bankers over austerity issues. As difficult as this current debt impasse is to resolve, such crisis is small change compared to surviving the Nazi occupation that was imposed on Greeks during World War II.

In the contemporary war of words and EU budgets, Wolfgang Schaeuble, Angela Merkel and the taxpayers of Europe are surely more amenable opponents than Hitler and the blitzkrieging Wehrmacht of the Third Reich.

Appropriately, a 93-year-old guy is trying to drag the issue of that debt forgiveness for Germany, back up into highlight of Euro-consciousness.

But as I mentioned above, Mr Glezos is no ordinary old geezer Greek, and here's why: 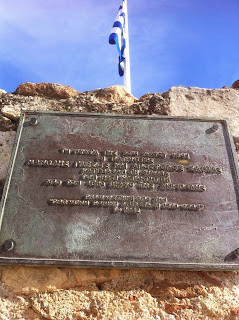 Back in the day--April, 1941--Manolis did something that forever defines and inspires the very character of the Greek people. The situation was this: the bullying wehrmacht of Nazi Germany had just rolled into Greece and taken control of the country. One of the first things the German soldiers did was to publicize their newfound dominance by raising a swastika flag atop the Akropolis, which is a great rocky outcrop in the middle Athens, and an ancient national landmark.

Manolis Glezos--only 19 years old at the time--along with his compatriot Apostolos Santos, climbed under cover of night, up the stony face of the Akropolis, to the highest place, where the Nazi flag was flapping in the breeze. Their mission was to establish, in a highly visible way, the resolute resistance of the Greek people against the tyranny of Nazi occupation.

When the daring duo reached that flagpole, they lowered the swastika rag, shredded it, and replaced it with the bold blue and white stripes of the flag of Greece. 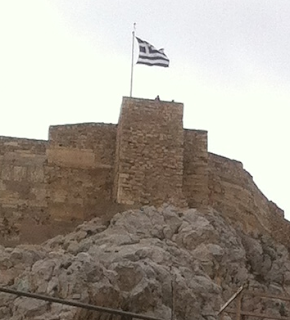 This, the people of Greece never forget. Furthermore, this American will never forget about it, after being told of the incident while I was in Athens a few weeks ago.

Now with a little help from the old hero, Manolis Glezos, Europeans will not neglect to remember what their nations did collectively back in 1953, so that Germany could recover and rebuild.

Nor should the Germans forget (nor the French, Belgians, nor everybody else) to remember what creditable grace was extended to their defeated parents/grandparents back in the day--post World War II.

Forget it not, while working together toward a restructured Greek debt in 2015. 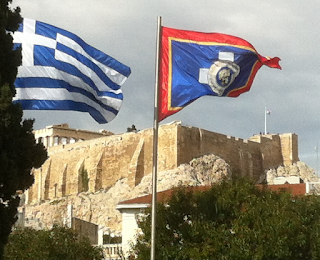 After all, is mismanagement of a national economy a more grievous offense that trying to conquer the whole damn world?

Get your house in order, Europe, and give the Greeks a break. Let them get busy again reconstructing their nation, instead of being strapped to the whipping post of old debts. They can rebuild, as they have been doing for 2500 years. They've done it before, and they can do it again, with a little help from m'friends.

You should know there are bigger problems on the horizon for Europe than old debts between members. You better get it together. It's time for the strong to bolster the weak, not humiliate them.

Humiliation is what ISIS does, not civilized Europe.

Smoke
Posted by careyrowland at 7:41 AM