A Clarinet Finish in Rome

After a week in Rome, this Friday afternoon was the beginning of the end for our sojourn here.
I was sitting at a table in a narrow cobblestone lane, Via Uffici del Vicario, enjoying an afternoon vino rosso. Pat was inside the Giolitto purchasing a few treats for later. My resting point was just a stone's throw past Piazza di Montecitorio, where the Italian Parliament had selected Sergio Mattarella as their new Presidente a few days ago. 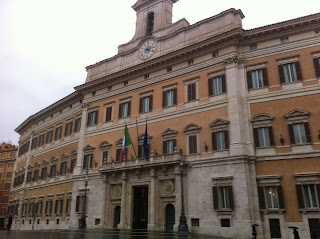 People from all over the world were ambling by me as I sat sipping. They were garbed in dark, protective warmth because the day was damp and cool. After a while, my eyes focused on a wall plaque that was mounted on a building across the lane. It looked like this: 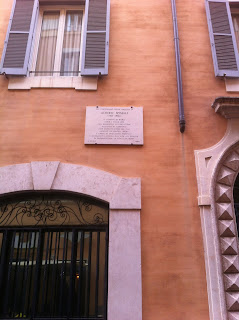 I was squinting to read the plaque, which was a dedication to Altioro Spinelli, a leader in Italian politics after the Big War in the 1940s. To understand any of this text was a challenge for me, although an interesting one, on this last afternoon in Rome. My only clue about the dedication on the plaque was a dim memory of Catholic high school Latin back in the day (1960s).
As I was studying this scene, and nurturing a smidgen of a the retrospective melancholia that would accompany our imminent departure from Italy, I heard the faint strains of a clarinet. At first I thought it was my imagination.
But a careful listening confirmed that it was true. Someone was playing a clarinet in the vicinity. As I tuned my ears to the vaguely familiar cadenza. . .it was. . . Gershwin's Rhapsody in Blue.
One of my favorites. How appropriate for this moment, I felt. The American traveler far from home in the Old World.
I savored the moment for a while, as the musician was projecting his tuneful magic upon the nearby world. What a moment.
It would be a long travel back home to the USA, and I was so thankful that Pat had been able to work this jaunt into our 35-year journey together.
Soon, Pat emerged from the Gialotteria. She took charge of the backpack while I walked around the corner to find the clarinetist who was crooning out Gershwin and few other snippets of woodwind ambrosia. I followed the sound; it didn't take long to locate the source. I turned a corner and there he was: 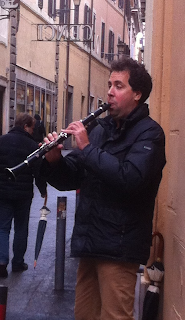 Grazia for the Gershwin, I mumbled and smiled; he was a few Euros richer as walked away.
Then we headed for our rented apartment; this was as far as our trip would take us away from home-- the end point of our Athens/Rome adventure. From this moment on it was just return trip, all the way back to the good ole USA.
Twenty or so minutes later, the sun was peeping out as we came upon Piazza Venezia for the last time. 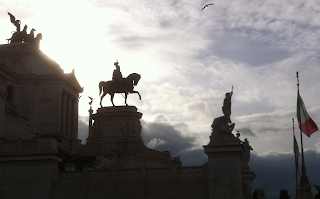 Then we bid a final farewell to Vittorio Emanuele and all the Italians and other adventurers (even the immigrants hawking selfie-rods) from around the world who had come here. We trudged on to the apartment for our final evening in Italy. Time to pack, have a last dinner, and get ready from an early departure.
Buenasera!
I certainly hope that ISIS is not able to disrupt all this.

Posted by careyrowland at 9:42 AM