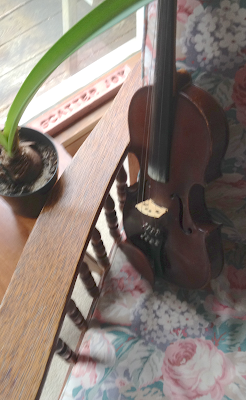 Oh, there was a time, when I was a young man, when I would fiddle around, and that was nice enough for a while.

Then life came and went.

Nowadays, I find myself content to merely listen while life slips by.

In ages past, a maestro such as Felix Mendelssohn could imagine something incredible; he could then summon up in his own mind and hands-- an exquisite composition, an intricate stream of vibrations--as sublime as any that could ever be coaxed from a mere box constructed of wood and wire. He could then write the composition. Then, 170 years later Hilary could set bow to instrument and, with help from the orchestra, make it all happen so perfectly.

Years go by. We pay attention, try to figure things out. There's always somebody out there who can do things better than we can. Leave the complicated stuff to experts. And listen. Listen and learn. Maybe you'll learn a thing or two.

Just daydreaming now; I think of Sally Field in Forrest Gump when she was playing his mother and she said life is like a box of chocolates; you never know what you're gonna get.

Think about 2008. Everybody just lollygaggin' along. . .then whoosh! well, you remember what happened. Everybody's shell-shocked. Uncle Hank stammering on the Tube. They had to twist Congress' arm two or three times before they'd come up with the money to fix the mess, at least temporarily.

Then the experts get trotted out to analyze, to testify, to figure what the hell happened in stock markets that made the thing come crashin' down--something about market manipulations of MBS's, unforeseen incredibilities of CDO's, the incredulous defaulting of credit default swaps blah blah blah

As the thing unwinds, along come the explanations, the excuses, the wagging fingers, the committees, the commissions, the oversight agencies get rolled out, cranked up. Republicans in shock because Obama's in. Democrats trying to figure out what went wrong and how to fix it. Democrats got to fix everything, so what do they do. . .

Let's fix everything up, they say.

Years go by. Big shock when Trump comes blasting' into 1600 Pennsylvania Ave after those 8 years of Mr. Smooth.

Now this morning we hear Amy and Juan on the radio, and here's Senator Liz whining about how the new Republican whirlwind wants to wind down Dodd-Frank, which was supposed to be the big fix, the big Democratic fix. I mean, she's a little bit crazy, like all Democrats, but there's one thing about Liz, she can play the rhetoric like Hilary plays the violin. It's no wonder Mitch had to cut her off last week. Anyway, Liz is saying:

"Commercial and consumer lending is robust. Bank profits are at record levels. And our banks are blowing away their global competitors. So, why go after banking regulations? The president and the team of Goldman Sachs bankers that he has put in charge of the economy want to scrap the rules so they can go back to the good old days, when bankers could take huge risks and get huge bonuses if they got lucky, knowing that they could get taxpayer bailouts if their bets didn’t pay off. We did this kind of regulation before, and it resulted in the worst financial crisis since the Great Depression. We cannot afford to go down this road again."

I mean, Liz might have a point there. If things are so ROBUST, why do we still get this feeling about the 20,000+ Dow? Is it deja vu, or deja due, or prescience, maybe too much twitter or not enough facebook, or a rerun of common sense or what? Maybe it's all just a bunch of hot air blowin' around and we keep wonderin' about the whole house of cards but we can't really put our finger on what's wrong cuz you know the answer my friend is blowin' in the wind and life is like a box of chocolates anyway, a mere lala land where we think we got it figured out but really we don't.

Although I do have to remind you, Liz, since I am a registered Republican: we can't fix everything. If we could, and if we did, why, how boring would that be?

So my advice to you is we'd best leave the fiddlin' to the experts. Sooner or later we'll all have to face the music anyway.