Recently I discovered this empty shell of walnut. 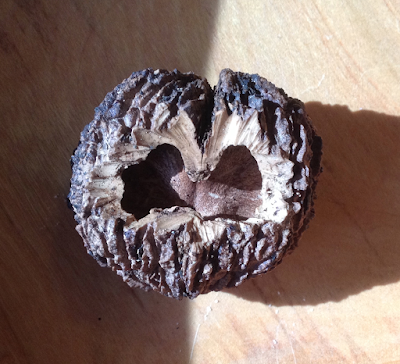 I saved it, because I wanted you to see it. Looking into its vast crevice provides a poignant glimpse into the world of a squirrel. 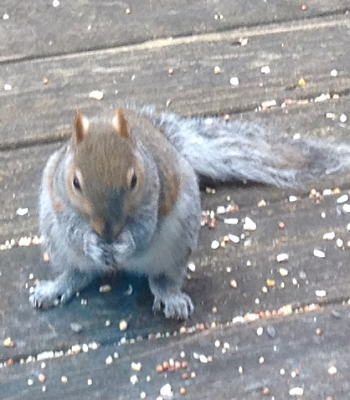 Even more significantly, however, it affords us a view into nature itself. Furthemore, this empty nutcase gives us a profound view into life itself, the meaning of it.

Peer into that void and ye shall see the truth, and the truth shall make you free.

When I was a young man, I make some poor choices, some mistakes. At one juncture, when I was about 27 years of age, my life went into a skid. I hit bottom, was in a bad spot, between a nut and a hard place and I was at a loss as to what to do, so I turned to God; Jesus pulled me out of the pit of my own errant ways.

Everything got better after that, although it has certainly been no bed of roses in the 38 years since the Lord of the Universe saved me.

Shortly after that salvation turnaround, I met a loverly girl and married her. By n' by, she presented a son and two daughters to me and since that time we've been in squirrel heaven, insofar as we abide in a woodsy area, happy as a squirrel in sugar maples.

In the first year of our marriage, we did an exodus from the rat race and relocated ourselves to a remote mountain town where we have lived ever since. A big part of that move was our involvement with a group of Christian believers, good people who are saved and sanctified by the blood of the Lamb.

Those were good, productive years, in which we took possession of our promised land--which is to say, our very own lives, instead of life as defined by superfluous externals such as success and keeping up with the Jones' blahblah. Up here in the Blue Ridge we were living as a bunch of young bucks and does, with many fawns coming along as a natural outcome. Many of us had been refugees from the destructive influences of countercultural excesses, having slogged, wounded and bleeding through the minefields of a corruptive world.

We were pretty excited about our quasi-communal churchified project, most of us raising our kids together, training them up together in the fear and admonition of the Lord. It was all good for a sufficient time; then things changed and we eventually went our separate ways, although a few of us still hang together, and that collective friendship is as satisfying now as the old wine that might have been bottled in Napa valley or somewhere during that era.

Our son recently joined with his wife near Napa Valley. Life is grand.

But back in the day, you see, when we were . . . as Don McLean sang, ". . . all in one place, a generation lost in space" (although we were no longer lost because we were all found, in Jesus) . . . back in that day-- a primary reason we were of one mind about such things as God and family was this:

We were all reading from the same script, the Bible.

And this was a good thing, although it had its drawbacks. We were trying to do everything "by the Book" instead of getting bogged down by the religious systems from which we had fled; as time passed, we did have a problem with spiritual pride. Arrogance.

Well, by 'n by, we--long story short--we paid the price for that pride, which is a very real sin issue for folks who think they know a thing or two about God and spirituality.

But in our born-again zeal we had a tendency toward legalistic judgements toward others who did not share our vision. So doctrine became a real sticking point for us, and actually, further along in the big picture, it turned out to be quite a stumbling block.

This is nothing new. It's been going on for thousands of years in the human race. There's always some person or group around who thinks they've got it all figured out better than everybody else.

But it was new to us, being young and wet behind the ears. In some ways. . . although we were living in a woodsy region, we could not see the forest, because of the trees that occluded our immediate vision.

Uncle Remus might have spoken that there is, among all creatures great and small, another minuscule mammal who inhabits our fancified forest: the squirrel.

And somehow or another, back in those old dogmatic days, we maligned that lowly creature's integrity when we used his identity for purposes of identifying what we considered to be bad doctrine.

If we didn't agree with the way a person or group interpreted scripture or even life itself, we'd called them "squirrely."

It was a euphemism, much easier to utter than saying plainly that we judge them to be wrong about something. Because, deep down in ourselves, we knew that we were not right about everything either.

But I'm here to tell ya that we were too hard on the squirrel; heshe is actually blameless, and I appreciate herhis dutiful purpose in the great forest in which we live. HeShe's actually a pretty good little critter, minding herhis own business and feeding their young'uns. And I greatly appreciate hisher Museship for having inspired this here squirrely stash of nutty musings.

No wise-cracks please. We live in a dangerous world. Remember another nutcase from back in our boomer childhood: Nikita Khrushev stood at the UN and said: We will burrow you! 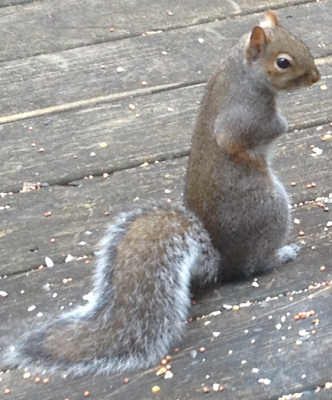 Glass Chimera
Posted by careyrowland at 9:39 AM