This is for the Birds


We placed this bird-feeder outside our kitchen window. We bought it from Lowe's, where I work a few hours every week, since I'm an old guy now.

This bird-feeder has been a real hoot. There's nothing in the world like watching birds, at close range, while they do their thing, whatever it is that birds are doing. I mean, it's hard to figure out what they're up to. Their ways are higher than ours.

Personally, I think they're a higher life form than we are.

Although yesterday, I had to wonder about them because of some of the petty bickering they got into that later came to my attention. 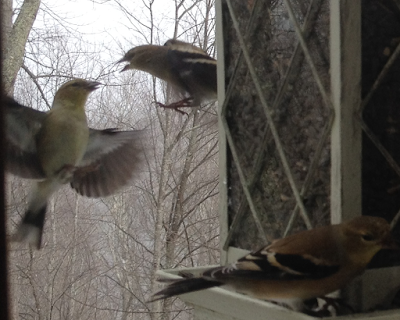 One of these birds was talking trash to the other, and so they got into a dispute about who was to have the corner spot on the White House. (We call it the White House).

The corner spot, like the corner office, is the hallowed position on the pecking order because it's easier there to pluck the seeds and kernels from the White House trough.

I thought these two combatants were arguing about the corner spot. But later, I found out otherwise. Shortly after the altercation occurred, I was visited by my informant, who shall remain nameless, except that I shall heretofore refer to him/her as deep Beak, so you'll know the aviant of whom I speak.

When deep Beak subsequently made his/her clandestine visit to me, I was, at that time yesterday afternoon, able to gather non-fake news (that is, the real scoop) about the real issue that provoked the confrontation you see photoshipped here. Deep Beak disclosed this information to me in a discreet manner to protect his/her own anonymity. As you can surmise here, deep Beak's face cannot be seen. I insist on preserving the anonymity of my source. 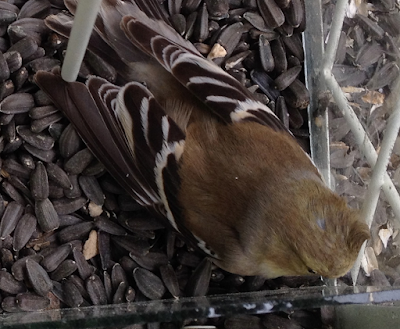 My source revealed that the two birdbrains pictured earlier were not arguing about the corner spot at the White House. In sooth, they were having a political discussion.

The cold, hard truth about these litigants is: they were arguing about Rule 19 of the US Senate. That's the arcane legislative rule that enabled the Republicans to do their very subtle, though obviously potent, power play on the senator from Mass so that the said senator could not retrieve from history some information about Jeff Sessions who was up for nomination as Trump's Attorney General.

Oh, and did I mention that deep Beak intimated to me that one of these combatants you see here is a Democrat and the other is Republican?

It's becoming more and more obvious to me that these birdbrains are too polarized to be thinking clearly. They are, forsooth, just playing politics. These two have been politicized beyond rationality; they are just winging it, making up stuff as they go along just for the sake of preserving their own tribal identity instead of their common heritage as endothermic vertebrate Avifauna.

Anyway, according to deep Beak, Jeff Sessions is a pretty good guy, although he has a checkered past, like all old Southern geezers, including this reporter, when it comes to his attitude and his professional history as a lawyer in Alabama as pertaining to the issue of Civil Rights, back in the day.

It has been reported that Senator Sessions, the AG nominee, has changed his tune--has even changed his tweets since the Dark days. He has radically revised his attitude toward blacks and their civil rights since those dark days of Jim Crow southern discriminatory segregatory laws that protected and prolonged the ancient scourge of racism and its deleterious effects.

Just ask Senator Tim Scott of South Carolina, if you have any questions about the nominee.

Let's hope Sessions has changed his tune, anyway, since he is now Attorney General of these here United States, which I hope will remain United.

The last time the secession talk got so heated up was when those wild-eyed Democrats of South Carolina declared their independence at Fort Sumter. But now its the Left Coast making the secession noise; we're hoping to keep California in the fold since they make all our blockbustin' movies out there, not to mention most of our fruits and nuts.

Blockbustin' movies is OK, but Union bustin' is not.

All you citizens of the good ole USA out there, keep an eye on your Senators and Representatives. Don't let them screw this thing up. We can't allow this good thing we got going fall apart. We must not permit this US thing fall apart over petty politics. Keep the birdbrains accountable.

And you should get a bird-feeder from Lowe's. Get a high on a bird today!

Glass half-Full
Posted by careyrowland at 8:03 AM