Of course everybody who goes to Rome brings home mucho pictures. People travel there from all over the world to tour the originating sites of the ancient Empire; then they take a little chunk of early European history home, in the form of photographs.

When we were there, yes, we certainly did do the obligatory tourist ritual of snapping photos of the so-called Imperial City. You’ve probably seen classic images of the Roman ruins, which commemorate the Empire period of two thousand years ago.

But I was most fascinated with a relatively new structure there, Il Vittoriano.

Designed in 1885, inaugurated in 1911, and completed in 1925, this incredible monument makes an absolutely grandiose visual impression when you first catch sight of it. 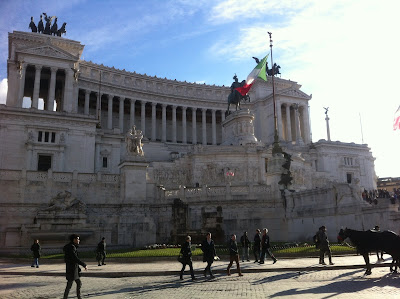 You can see from this grand edifice that the Italians have never forsaken their proudly imperial self-image.

This morning, however, a Roman venue of a grittier sort—the Circus Maximus— was brought to my attention. In his Seeking Alpha post,

Mark J. Grant used that  ancient racetrack as a metaphor for the  fiscal contest that is now heating up over in Europe.

Here’s what Mark wrote about the presently escalating Continental showdown:

“The new "Circus Maximus" will include all of the European Union and their population of 512 million people. Sit back and enjoy the grand spectacle as Italy has now presented its budget and the European Commission has sent it back. Rome then reacted to Brussels and stood steadfast on the banks of the Tiber and now the overmasters in Brussels and Berlin will hand down judgment, and likely some form of bureaucratic justice, that was not fashioned in Italy, but which Italy is expected to obey.”

The original Circus Maximus, however,  is just a dirt racetrack.

If you’re a boomer geezer like me, you may remember, from a classic race scene in the 1959 MGM movie, Ben Hur, Charlton Heston heroically outmaneuvering a less-than-honorable competing charioteer, to win the great chariot race. 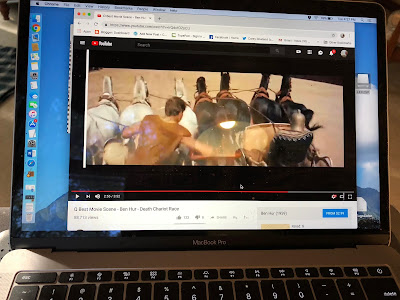 That scene may or may not have taken place in the Circus Maximus of olden times.

The real Circus Maximus, where those famous chariot races usually took place, wasn’t conducted in the Colosseum. The actual site was really a huge dirt track, located near the Tiber River, beneath Palatine Hill, where Roman emperors and their hobnobbing hoodoo entourages could view the spectacle from an elevated, privileged position. Here’s what the real Circus Maximus looks like now: 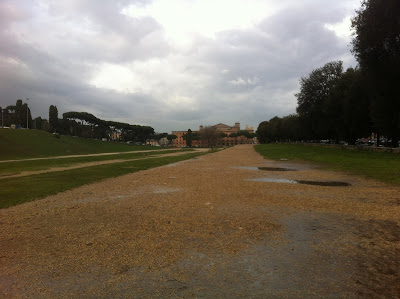 Seeking Alpha blogger Mark J. Grant speculates figuratively on how the present European budgetary shootout at the Circus corral may turn out:

“The European Commission will likely wield the big stick. This is initiating its so-called 'Excessive Deficit Procedure.' This process has never been used before and will likely be tortuous for both Italy and the European Union. Fines have never been applied to any country, with previous breaches by France and Germany overlooked, and yet, there is always a first time.”

If Mark J Grant’s racetrack metaphor is indeed indicative of the present European Contest, we’ll see in the days ahead whether Italy’s impudent leaders can prevail in their fiscal rebellion, or whether they will go down with classic mutterings of “. . . et tu, Brussels?”

Smoke
Posted by careyrowland at 3:36 PM