For a very long time, people have been wandering through our world.

Many choose the rootless lifestyle because wandering makes them feel free. Others crave adventure, or exotic experience. Some launch out in search of new opportunities, greener pastures, richer soil, more money and less trouble, or better jobs. Or maybe just wide open spaces instead of crowded hovels.

Pilgrims wander in search of the sacred; saints strive for holiness; sinners search for sin,  seekers seeking yang or yin.

Refugees are all over the globe, frequently concentrated at certain infamous borders. We see pictures of them with trouble in their faces and children on their backs.

In earlier ages of our world development, populations were concentrated in old world cities and settlements. By ’n by, through exploration new world continents were discovered. Immigrants began streaming to the open lands. They spilled across borders, through forests, across streams, over mountains. We congregate along coasts.

Only two centuries ago, the North and South American continents were wide open spaces, as compared to the Old World. While our undeveloped wide open spaces were  being populated, millions of immigrating travelers streamed in through the ports; they trundled through the coastlands, trudged across vast prairies, navigated the swift rivers, slogged over steep mountains.

But eventually those wide open spaces filled up with settlers. From virgin countryside, the New World sprouted millions of farms, foundries, factories, and modernizing facilities fulfilling functions about which our forebears held absolutely no understanding. All along those rising watchtowers and MainStreet thoroughfares  towns sprung up;  cities burgeoned into metropoli, and before you knew it America was as crowded as the old country.

Americans worked hard and prospered. We got rich. Agriculture was flowing; industries were growing, stores and businesses were showing so many services and goods. Everybody’s fat n’ happy, pleasing mom ’n pappy; wages high; expenses low, keepin’ up with them Joneses just for show. And we built ourselves quite a nice little nation which later became, after a couple of world wars, a beacon of liberty in the eyes of the world. 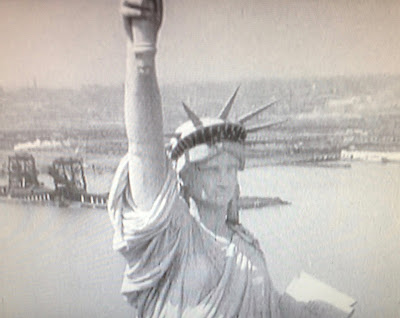 Well that was then and this is now.

After 9/11, seems like everything changed, and not for the better. Instead of grace and generosity, we seem to have slid into a descent toward selfishness and paranoia.

And I can understand that.There are, after all, bad people in the world, and terrorists and self-righteous fanatics who are willing to destroy the world in order to save it. And yes, we do have to form a humane strategy for protecting our citizens from war and destruction. Let's not forget, however, that America is the land of the free and the home of the brave. We need not slip further into xenophobia than we already have.

As our British brothers and sisters had earlier discovered, running an empire is no walk in the park.

Now what used to be the great American experiment seems to be slipping into a world gone mad.

As I was pickin’ around with some tunes recently, I remembered an old song from back in the day that pertains to these matters, as conditions had existed in the earlier times, when everything was different and the continent we absconded from the natives was still wide open with what we thought was freedom and possibility.

I stumbled across a tune from rhymin’ Simon. The song moved me deeply, so I thought I’d toss it out there for you to hear and ponder. I hope Paul doesn’t mind, especially since he himself borrowed part of the tune from an old Christian hymn.

And here’s another old tune from back in the day, which I think Woody or Pete had something to do with.

As you listen, I wish you to be warm and well-fed, which is what most folks in this world are searching for, at least until they manage to become fat ’n happy.

King of Soul
Posted by careyrowland at 7:22 AM