This is a bad situation. 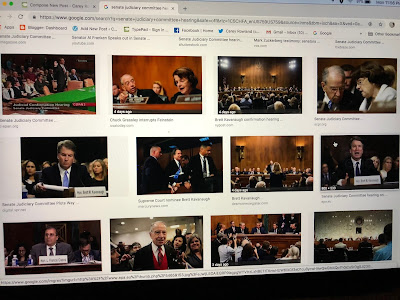 It is probably true that many many men have been getting away with rape in days gone by. And it is certainly true that politics and trouble have polarized and spun out of social control as many many victimized women who are mad as hell about the arrogance with which men flaunt their libido and leverage their blahblah white male privilege and so it is indeed possible that all hell is breaking loose in America.

And it is true that a couple of those rad feminists caught Jeff Flake while he was trying to get on or off an elevator, and those two feisty women delivered a tongue-lashing that would intimidate any uppity male member into limp impotence and politically correct compliance.

And it is true that Jeff Flake threw a curve at his fellow Republicans by trying to do the right thing and provide a forum for all this raw rage to be aired out. Maybe he did all of us Americans a favor by in effect slowing down the runaway train of GOP nomination fever, for the sake of casting our eyes for a week or so on the extreme danger that is inflicted on Americans by so many men walking around in hyped-up sexual frustration.

But the possibility that any of these issues will be resolved in the next week, as the FBI investigates Blasey Ford’s accusations—is about as probable as the New Ladies’ Temperance Union imposing mandatory burka coverage upon the live skin of all those millions of young women of America who so delight in flaunting their provocative features, even as they revel in denying lecherous men access to the partaking thereof.

And so, while this started out as a bad situation last Friday, what we know for sure is that by next Friday it will be a worse situation.

But my strategy concerning such bad situations as this is: Write a song about it.

I wrote a song about what happened in the Senate Judiciary Committee meeting last Friday, around 1:30 Congressional time. I borrowed the melody from Mamas and Papas old tune, Creeque Alley.

You can find the tune sung at http://www.careyrowland.com, at pretty much the top of the page:

The Ballad of Brett v. Blasey
Posted by careyrowland at 9:36 PM